Earlier this month, I shared my first impressions of the Framework Laptop.

As a reminder, Framework set out to deliver a laptop that encourages home servicing and incremental upgrades. I ordered the “DIY Edition”, with the following specification:

The assembly process was incredibly straightforward, supported by smart design decisions from Framework, specifically, well-organised internals, labels and instructions for each serviceable part, as well as the inclusion of a handy T5/PH0 double-sided bit screwdriver.

The build quality of the laptop is very good, but not what I would consider premium. The Framework Laptop does not have the same dense, refined feel as an Apple MacBook or Dell XPS. Instead, I would compare it to a mid-range Dell, with a focus on practical usage vs. aesthetics.

For example, the chassis is made from 50% post-consumer recycled (PCR) aluminium, but it is not overly rigid, resulting in some screen flex and wobble when typing. The same can be said for the trackpad, which lacks the “precision feel” of a Dell XPS or Razer Blade.

With that said, these are minor complaints that do not impede the daily usage of the laptop.

Since my purchase and following their promise, Framework has released newly upgraded parts and open-source accessories.

The most significant is the Intel 12th Generation mainboard, which remains compatible with the original chassis.

There have also been some interesting community modifications, using the published schematics to 3D print accessories, such as a standalone case for the mainboard.

In short, the hardware continues to impress and it is great to see Framework deliver new updates/parts, helping to build trust in their promise to enable home servicing and incremental upgrades.

Complimenting the “open” nature of the hardware, I felt it was only right to install an open-source operating system.

The Framework Laptop is fully Windows 10/11 compatible and the likely option for most users. However, as a Linux fanatic, there was only one choice for me!

Frustratingly, I encountered an issue with the WiFi driver. In theory, this can be fixed by installing the backport Intel WiFi driver package using the command below.

However, the included Intel AX210 vPro WiFi simply refused to connect. I tried multiple workaround options (following guides on Reddit), but no luck.

Although I have grown to love Pop!_OS, I decided to switch to my old faithful, Fedora. The timing was good, as Fedora 36 had just been released and I was eager to check it out.

I am pleased to report the installation of Fedora 36 was perfect, with full drive encryption and every driver, including WiFi and the fingerprint reader, detected natively. 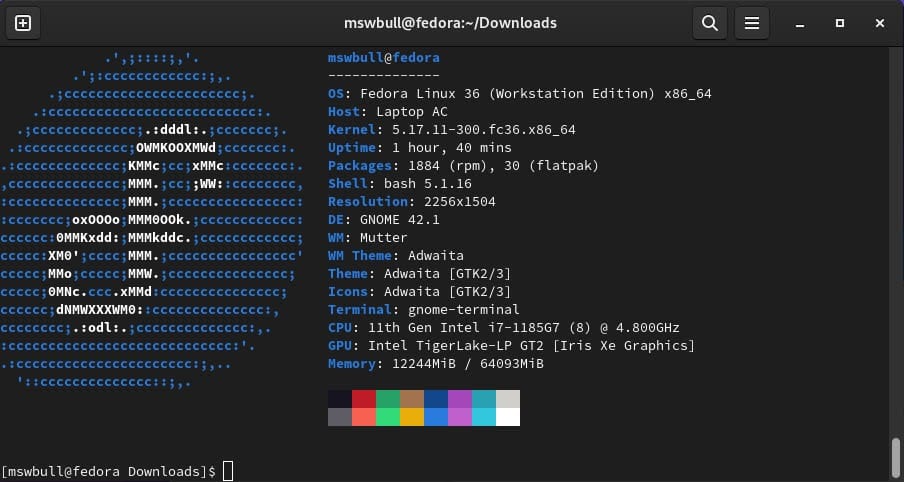 This is a great example of how good Linux can be, with no need to install/configure third-party proprietary drivers, etc.

I suspect my issue with Pop!_OS was simply a bug, which I am confident will be resolved soon.

Once up and running, I installed my default software. Thanks to the growing popularity of immutable operating systems such as Silverblue and the recent launch of the Steam Deck, the majority of my software is available as a flatpak.

Therefore, the installation was as simple as running the following commands.

Outside of flatpak, I installed Docker Engine and Docker Desktop. Fedora includes Podman, which is an excellent container engine.

However, I am most familiar with Docker and haven’t invested the time (yet) to migrate my workloads.

Getting Docker up and running is a little more involved, achieved via the following commands.

Docker Desktop is available as an “rpm” download, which I installed using the following command.

The login for Docker Desktop relies on the “pass” password manager to store credentials as gpg2-encrypted files.

Therefore, before authenticating via Docker Desktop, “pass” must be initialised.

1Password, is my prefered password manager. It is available as an rpm package, installed via the following commands.

Starting with RPM Fusion, which is a repository of add-on packages for Fedora. It includes some useful packages that are not directly included with Fedora.

The following command enables the “free” and “non-free” repositories.

Next is fonts, where I install the standard Microsoft fonts for improved Microsoft Office compatibility.

Throughout the setup process, I noticed the sleep/suspend state was not ideal, essentially resulting in a high battery drain whilst the laptop lid was closed.

By default, Fedora does not support hibernate (although it can be configured). Therefore, the default sleep state is “s2idle”, which is not well optimised. This can be confirmed using the following command.

Although not perfect, I switched the sleep state to “deep” by modifying the file ‘/etc/default/grub’, inserting the parameter ‘mem_sleep_default=deep’ at the end of the line containing the ‘GRUB_CMDLINE_LINUX’ string.

The final string should read:

Once added, I rebuilt the grub file using the following command (specific to UEFI).

Upon reboot, the sleep state should now default to “deep”, which in my testing significantly reduces the battery drain with the lid closed, with the only caveat being a slightly slower resume time (approximately 15 seconds).

That’s it! My Framework Laptop is now fully set up, running Fedora 36.

Overall, the process was fairly painless, primarily thanks to the “Linux friendly” hardware choices and the modern Linux Kernel (Linux Kernel 5.17) included as part of Fedora 36.

Over the coming weeks, I plan to put the Framework Laptop through its paces. Therefore, be sure to stay tuned for updates regarding performance, reliability and usability.