Package managers provide a way of packaging, distributing, installing, maintaining, and removing applications. Packages contain metadata, such as the applications name, description, version, vendor, checksum, and a list of dependencies.

In the Linux ecosystem, package management is very important, as applications are downloaded and installed from repositories, often requiring specific dependencies to run correctly.

To add additional complexity, there are multiple ways to interact with a package manager. For example:

I am most familiar with YUM and DNF, but even after years of use, I still find managing packages cumbersome (hence I created a DNF Cheat Sheet.

Thankfully, over the past few years, package management across the Linux ecosystem has been slowly evolving, driven by the desire to deliver cross-distribution packages.

Introducing Flatpak and Snappy, which are both cross-distribution package managers.

Flatpak was developed as part of the freedesktop.org project and was originally called xdg-app. Key features include:

Flatpak is supported by 21 Linux distributions, including Ubuntu, Fedora, Mint, etc. Packages can be discovered, downloaded and installed from FlatHub.

Snappy was developed by Canonical (e.g. the developer of Ubuntu). The packages are called snaps, enabled by the snapd tool. Key features include:

Snaps are supported by 41 Linux distributions, including Debian, Fedora, etc. Unsurprisingly, Snappy comes pre-installed on Ubuntu. A popular source to discover, download and install snaps is Snapcraft, as well as the Snap Store app.

Earlier this year, I shared my list of commonly used Linux software. Building on that post, the table below highlights which applications are available via Flatpak and/or Snappy. 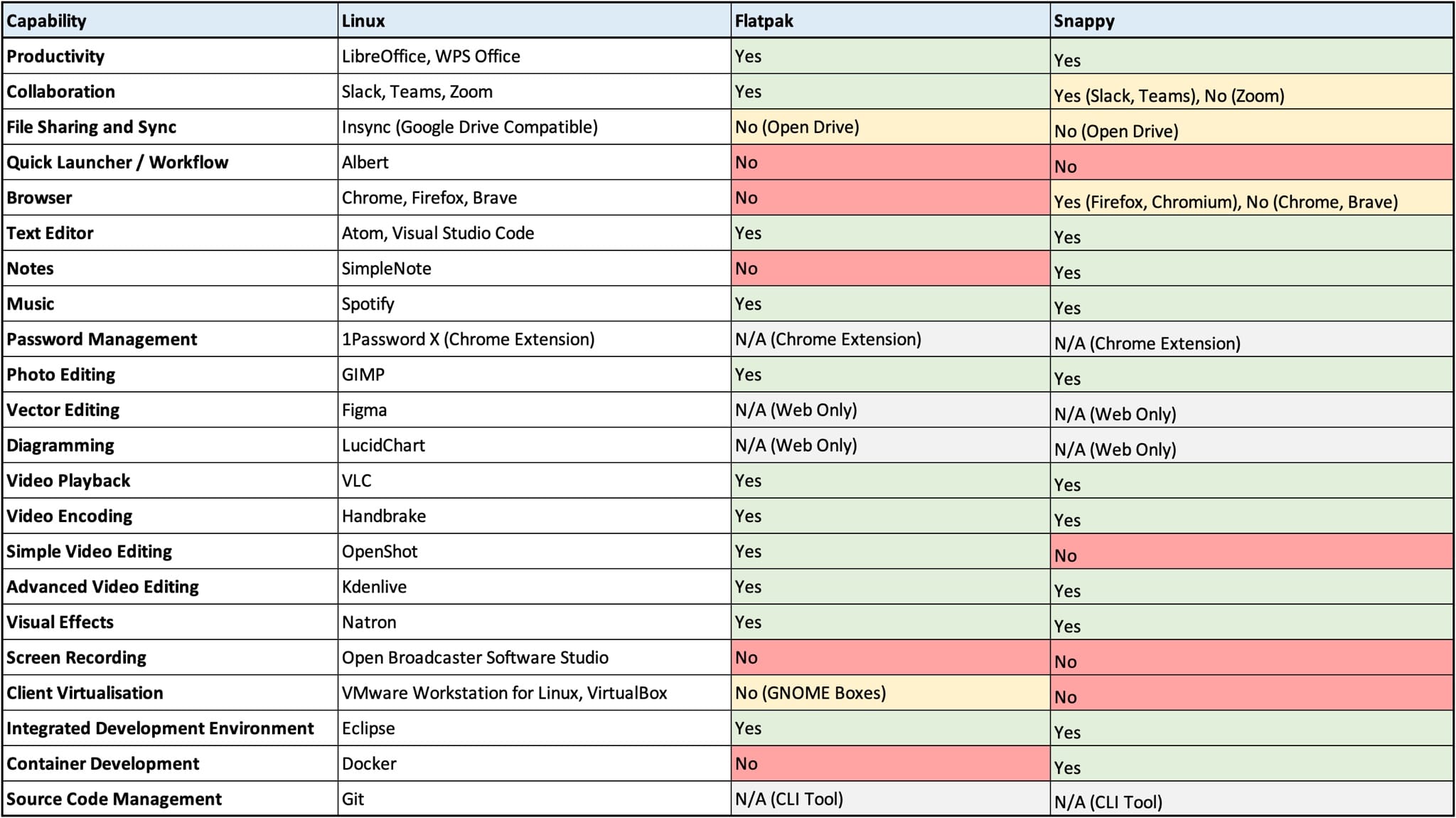 As you can see, in the context of my workload, I have reasonably good coverage across Flatpak and Snappy. It is also worth mentioning that I found the search on FlatHub to be far more accurate/effective than Snapcraft.

There are other cross-distribution package managers, for example, AppImage. However, the majority of my usage has been with Flatpak and Snappy.

It is a little ironic that multiple technologies have emerged in an attempt to reduce the fragmentation of package management across the Linux ecosystem. Personally, I prefer Flatpak, as I am predominantly a desktop user and believe their “independent” position better serves the Linux community.

With that said, Flatpak and Snappy can be used simultaneously (which is what I do on Fedora), therefore, at least these new cross-distribution package managers do not conflict with each other.

In summary, I am an advocate for the use of cross-distribution package managers, although ideally there would be one independent open-source option, instead of competing technologies. Over time, we might see consolidation or clearer positioning, where specific package managers are positioned for desktop, IoT, etc.) Finally, I am excited to see how features such as “application isolation” and “decoupling” can help enable new paradigms like immutable operating systems (e.g. Fedora Silverblue).