Since May, I have been using a Framework Laptop as my daily driver, running Fedora 36.

I have written a few articles highlighting my experience.

The hinge targets a personal criticism highlighted in my previous article. The original hinge was not overly robust, resulting in noticeable display wobble when typing. Likely subjective, but this was a point of frustration for me.

The upgrade kit is the real star of the show, specifically the Intel i7-1280P. The new Top Cover is a welcome addition, but not something I would consider essential. 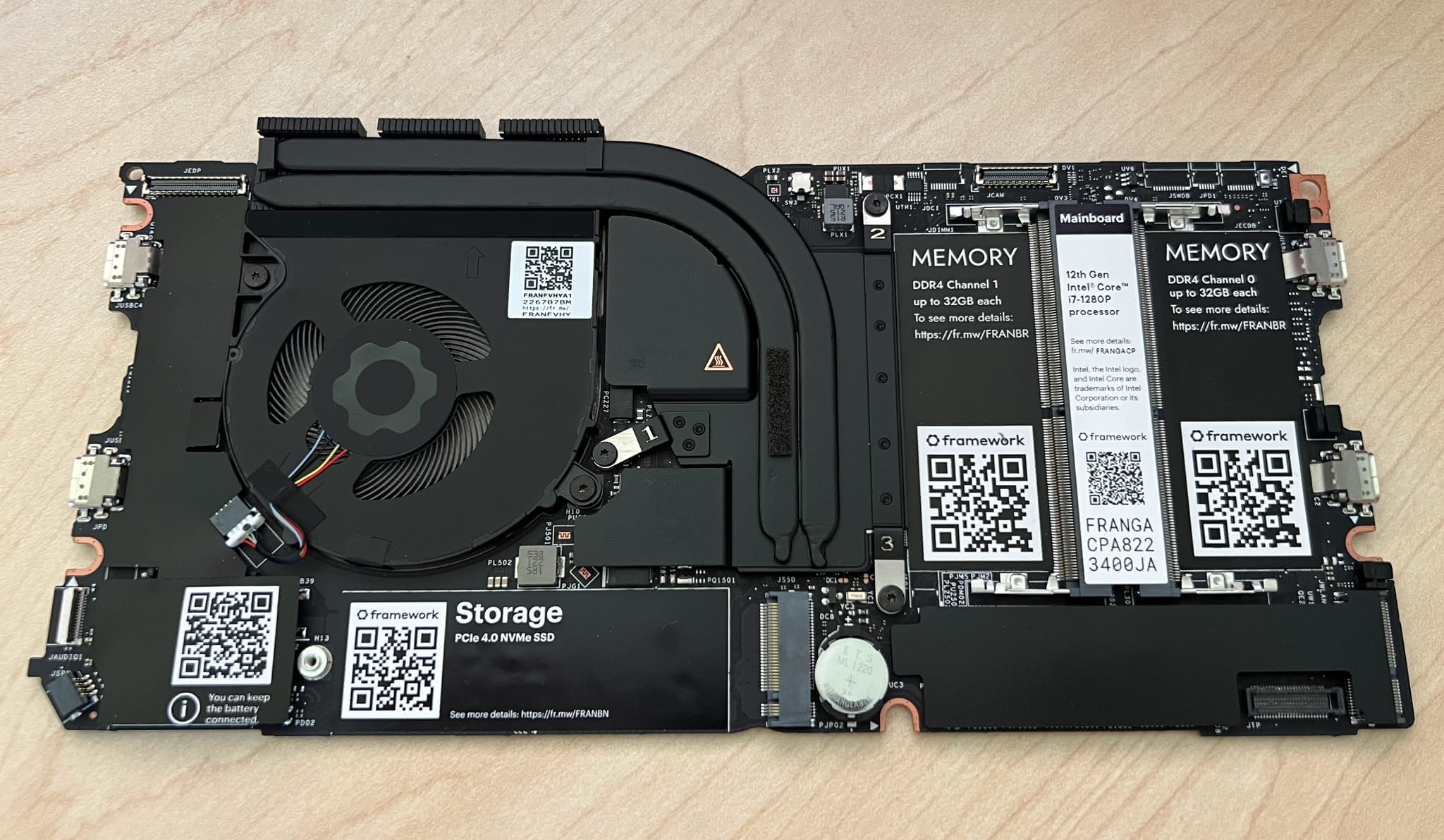 As highlighted in my previous articles, the original 11th Generation Intel i7 Processor (Tiger Lake) is very capable for daily usage (productivity and collaboration), but certainly not a high-performance part. The full specification can be found below.

The 12th Generation Intel Core i7 Processor (Alder Lake) is a significant improvement, with more cores, threads and cache, but also higher power consumption. The full specification can be found below.

I am not aware of any other laptop where you can upgrade the mainboard, incrementing the architecture generation (Intel 11th Generation to 12th Generation), whilst adding 10 Cores, 12 Threads and doubling the Cache (12MB to 24MB).

In my opinion, the launch of the Intel 12th Generation mainboard validates the “right to repair” model defined by Framework, as it is an order of magnitude more complex than “simple” upgrades, such as the display, battery, etc.

I decided to replace the mainboard, display hinges and top cover at the same time, although this could be completed incrementally. All other components, including the memory and storage, were reused from my Intel 11th Generation laptop.

Although it is technically possible to swap the mainboard without reinstalling the operating system, I had already decided to do a clean install of Fedora 36 post upgrade.

The entire upgrade process is completed via one tool, the included screwdriver (T5/PH0 double-sided bit). Access to the mainboard is achieved via the input cover, which is released via 5 magnetic screws on the bottom cover

All primary components include a QR code, which links to the specific user servicing guide. This is a nice touch and very pro-consumer.

I started with the mainboard itself, which includes 34 steps, but I am pleased to report was very simple.

With the seven connectors and five screws removed, the mainboard easily lifts from the chassis. 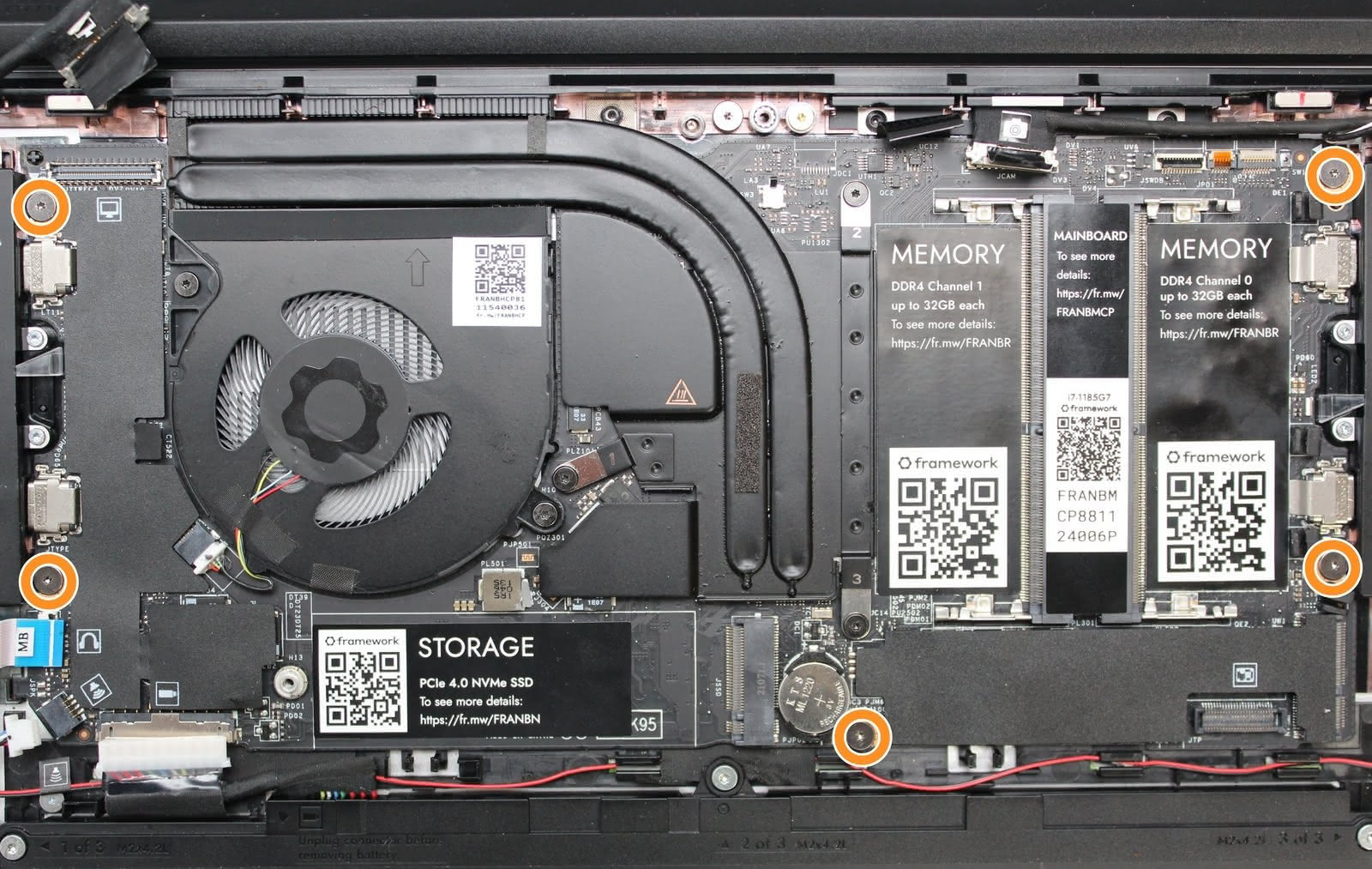 Even with the more powerful processor, the cooling solution on the Intel 12th Generation mainboard is similar in design, size and weight to the Intel 11th Generation. It will be interesting to see how effectively it cools the additional 10 Cores and 12 Threads.

The mainboard upgrade took less than 10 minutes to complete. The only area that requires additional focus was the removal of the connectors, as some of the flex cables are delicate.

Next, was the hinge and top case upgrade.

This was a little more fiddly. The top case upgrade includes 21 steps, requiring the removal of the display, camera module and Wi-Fi antenna cables, which are all delicate components.

I had to pay special attention to the Wi-Fi antenna cables, which include tiny connectors and are routed across the mainboard into the top case. This is not a criticism of Framework, simply a required compromise to ensure industry standards are maintained. 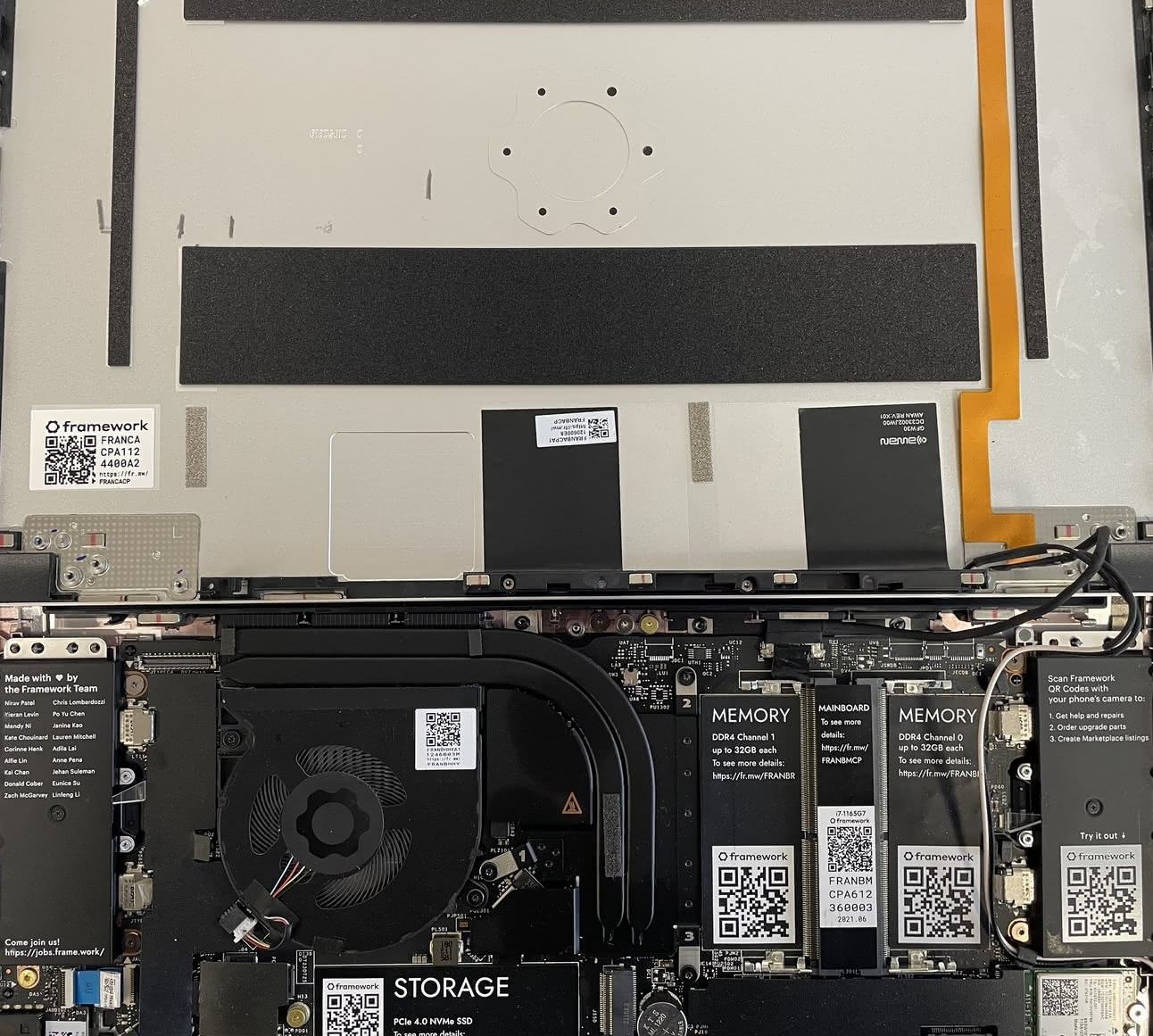 The hinge (two parts) was a simpler 18 step process, with the only minor frustration being the strength of the magnets used as part of the Framework top case design, which tended to attract the screws from the screwdriver when installing. 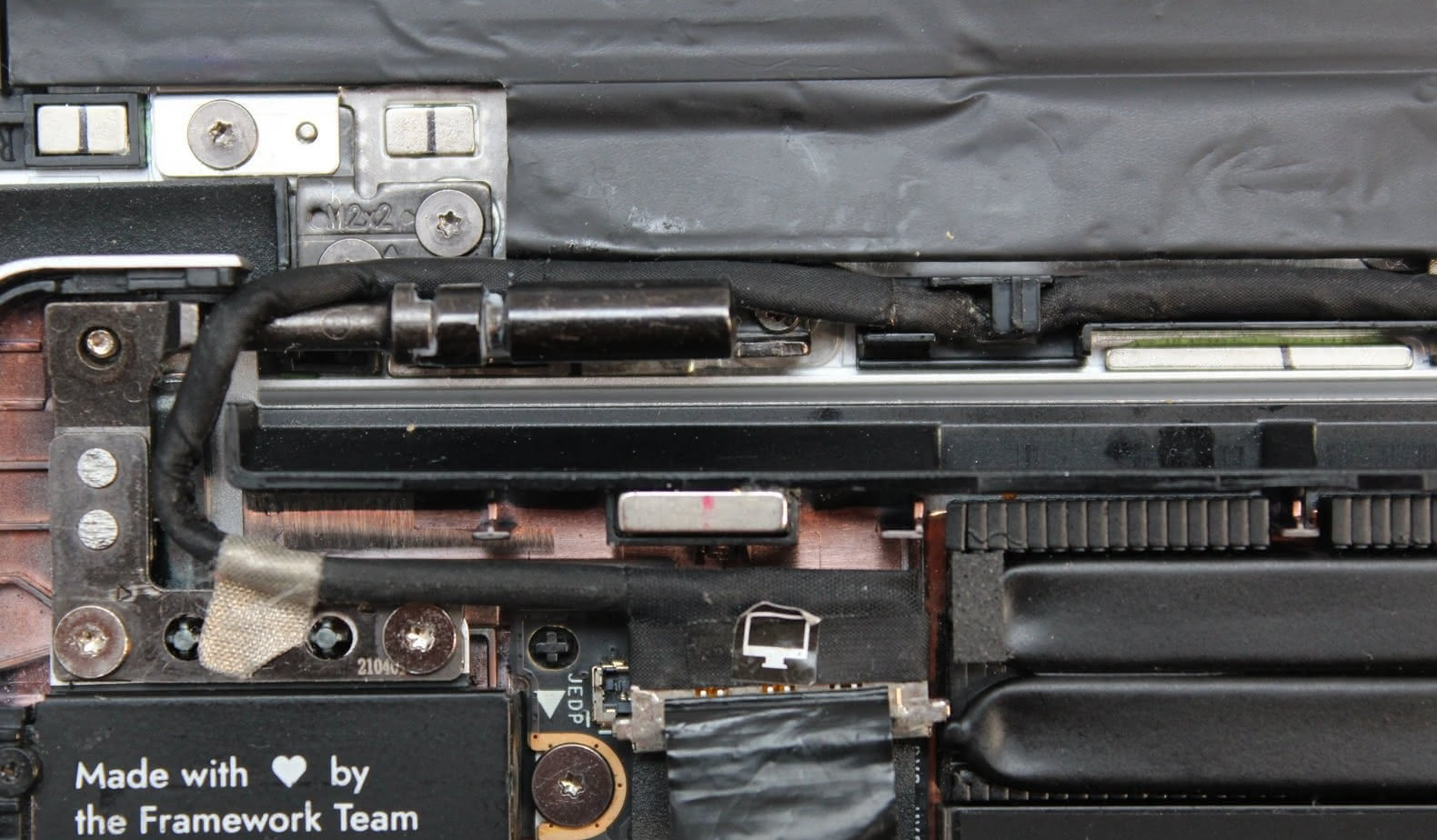 If you plan to upgrade the top case and hinges, I would recommend purchasing them together, knowing the installation requires similar steps.

With the new hinges and top case installed, I could immediately feel the difference, specifically, the hinges, which require more force to manoeuvre, removing the wobble when typing.

The top case impact is less apparent, which considering it was the most “complex” part to upgrade, makes me question the value.

The hinges and top case took around 20 minutes to upgrade, with most of the time spent ensuring the display, camera module and Wi-Fi antenna were removed and reinstalled without damage.

With the upgrades complete and existing memory and storage were re-installed.

The UEFI BIOS confirmed all the components were detected as expected and the new Intel 12th Generation mainboard was running the latest BIOS version.

At which point, I inserted the Fedora Installation Media (USB Drive) and reinstalled the operating system.

Upon completion, I am pleased to report the drivers for the Intel 12th Generation mainboard were immediately detected and initialised by Fedora 36 (Linux Kernel 5.18.17). 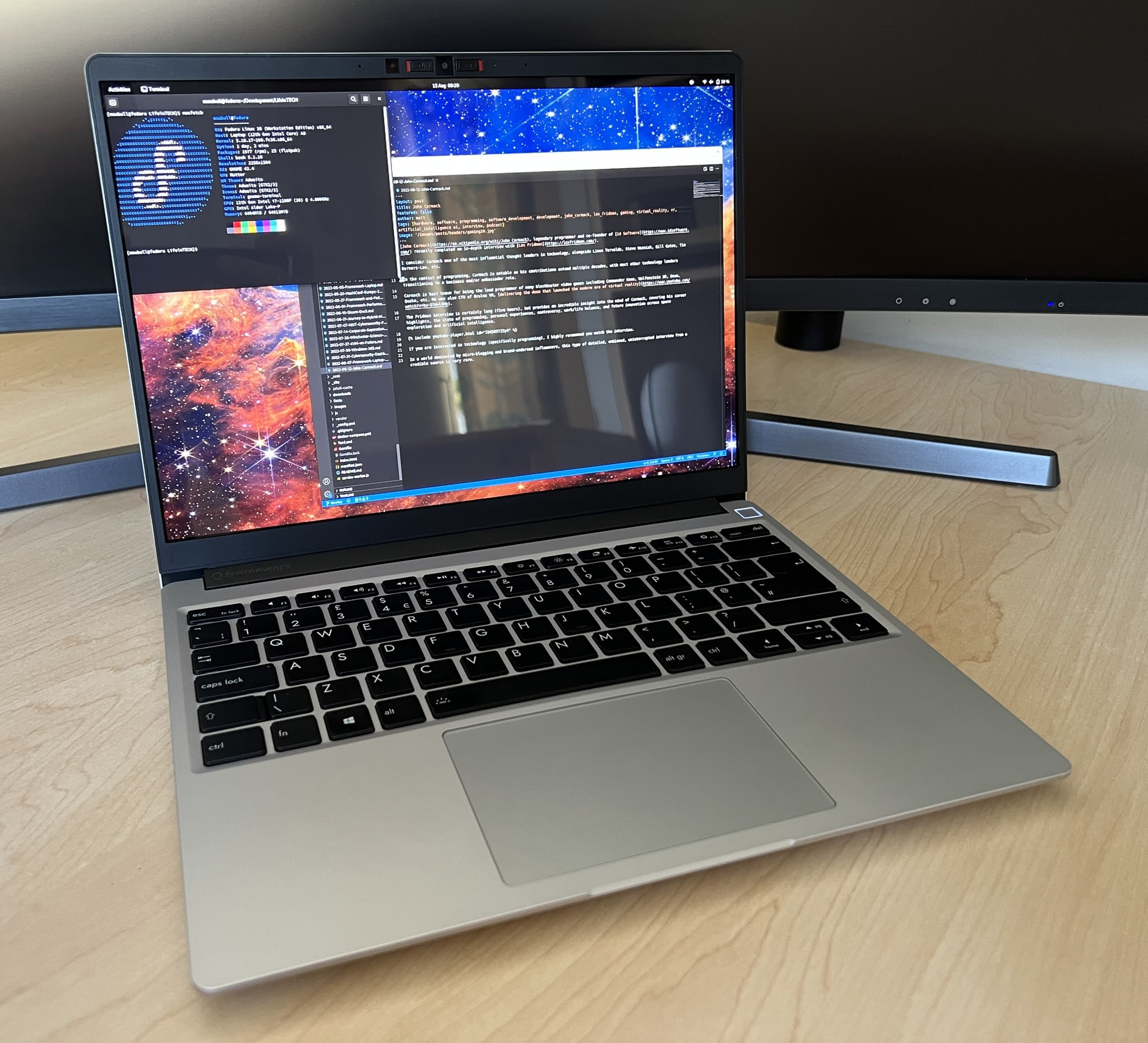 The only issue I have encountered relates to the display brightness hotkeys, which failed to respond. Thankfully, the Framework team were aware of the issue and had posted a knowledge article.

Great work to the Framework team for delivering against their “right to repair” promise and producing a high-quality product with excellent (user-centric) documentation.

Regarding performance, I used my previous Geekbench score and Docker build time as a reference.

As you can see, Geekbench highlights a healthy 76% increase for multi-core workloads. 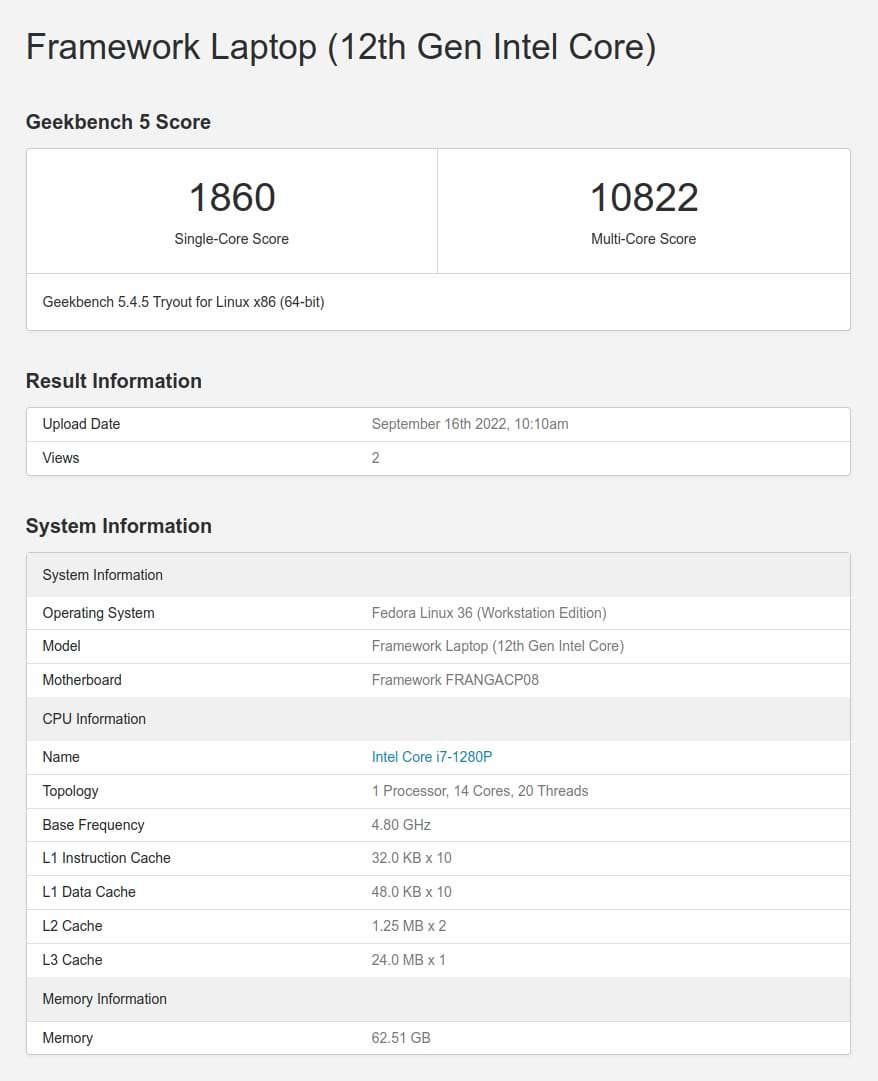 This result is not a surprise, considering the Intel 12th Generation mainboard includes 10 additional cores and 12 additional threads. The single-core performance is less exciting, showing a modest 7.7% increase.

Regarding Docker, I executed my standard build, a project that includes over 4000 individual files and 800MB of data.

This was an impressive result, highlighting a 40% decrease in build time. Any build time decrease is always welcomed, as it can be very disruptive when integrating code throughout the day.

Finally, it is worth mentioning battery life.

Actual usage is very respectable for a Linux laptop, but cannot rival a modern Apple MacBook. With a varied workload, I have been achieving between 6 to 8 hours, although more consistently able to reach 8 hours when compared to the Intel 11th Generation.

The main issue with the Intel 11th Generation was the battery drain when sleeping. As a result, I was forced to switch the sleep state from the default “s2idle” to “deep”.

Previously, with the sleep state set to “s2idle”, the battery percentage would drop by approximately 15% per hour, resulting in a maximum sleep time of 6.5 hours before the battery would die (very frustrating).

With the sleep state set to “deep”, the battery percentage drop improved to around 1.6% per hour, achieving a more respectable (but still bad) 14.4% drop overnight (nine hours). However, this change has a trade-off regarding wake time, which can take upwards of 15 seconds.

The Intel 12th Generation appears to deliver better results, achieving an equivalent 1.6% per hour battery drain with the sleep state set to the default “s2idle”.

Compared to a modern Apple MacBook (or even a Windows laptop), these sleep numbers are still horrible. However, they are now at least manageable with the Intel 12th Generation and will hopefully continue to improve over time with new firmware/software releases.

In conclusion, I am very pleased with the upgrade process and improved performance, specifically multi-core and battery life when sleeping.

Things are still not perfect, but certainly, a positive step forward, building upon an already very solid foundation.

I look forward to seeing what comes next for Framework, maybe the addition of an AMD Ryzen-based mainboard and/or new display options offering anti-reflective coating, higher refresh rates, etc.