Earlier today I received the Meta Quest Pro, which is the latest Virtual Reality headset from Meta (formally Facebook/Oculus).

My first experience of Virtual Reality was in the early-90’s when I stumbled upon a demonstration of a Virtuality 1000CS. However, I didn’t start to take Virtual Reality seriously until around 2016, with the release of the Oculus Rift Consumer Version (CV).

Over the years, I have owned multiple consumer Virtual Reality headsets, starting with Oculus Rift Developer Kit 2 (DK2) and most recently the Meta Quest 2.

I have also explored other Mixed Reality headsets/glasses, such as Google Glass and Microsoft HoloLens 2.

The Meta Quest Pro does not replace existing the Meta Quest 2, instead targeting a different audience. It shares the same core architecture (Qualcomm Snapdragon XR2), with the focus being new optics, sensors and controllers.

The specification can be found below.

To justify this price change, Meta describes the Meta Quest Pro as a business device, not targeting consumers. With this positioning, the Meta Quest Pro sits alongside other business-centric Mixed Reality headsets, such as the Microsoft Holo Lens 2 ($3,500) and Magic Leap 2 ($3,299).

I suspect this positioning will confuse and disappoint many Meta (and previous Oculus) customers that likely hoped to see a successor to the popular (and price-competitive) Meta Quest 2.

This was apparent in the recent Meta Connect 2022 Unscripted Talk from John Carmack, who believes Meta should be prioritising a low-cost, mass-market virtual reality headset. 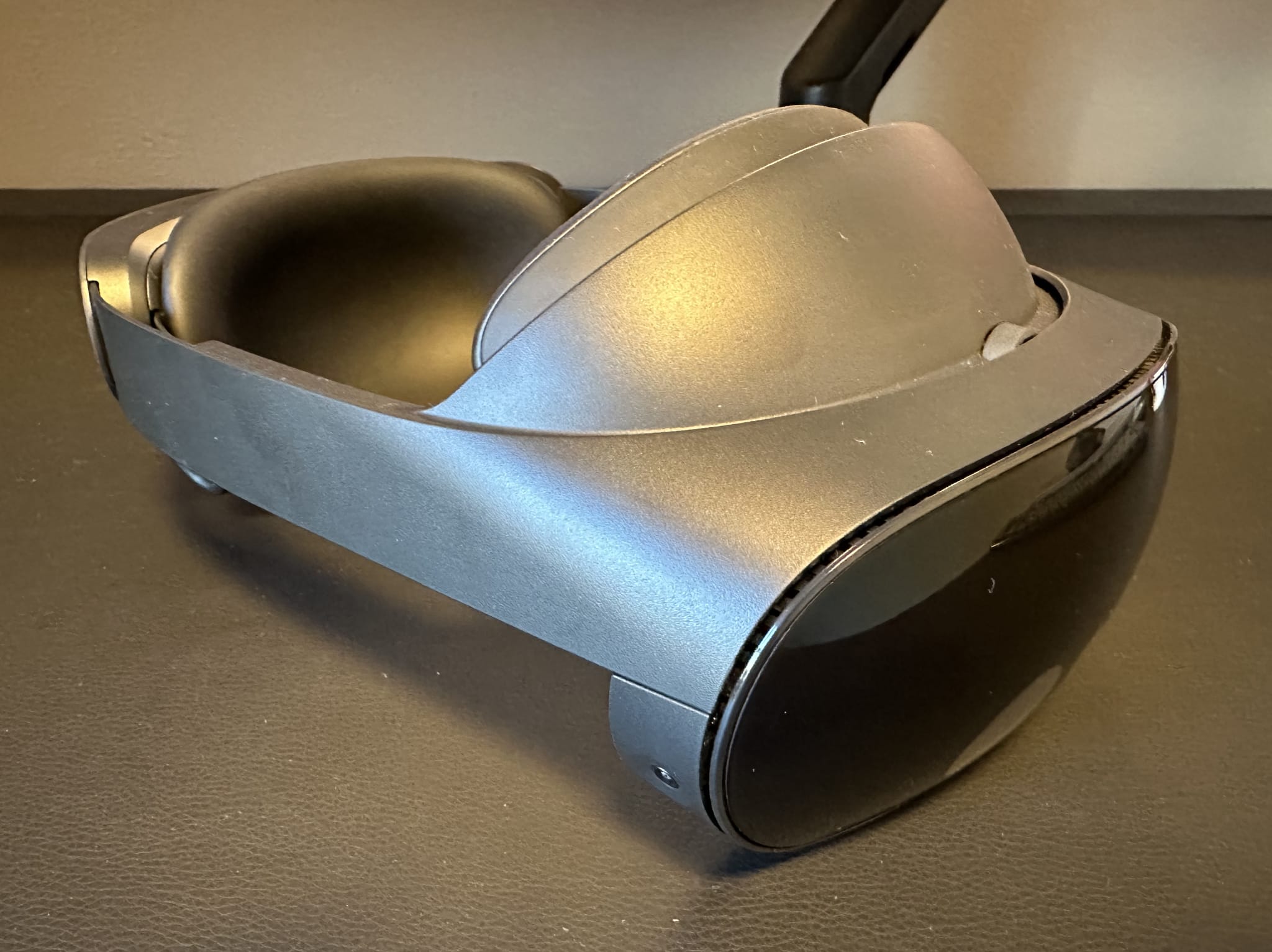 The headset itself is reasonably heavy at 722g, compared to the Meta Quest 2 at 503g. However, the weight has been redistributed between the front (optics and system on a chip) and back (battery). 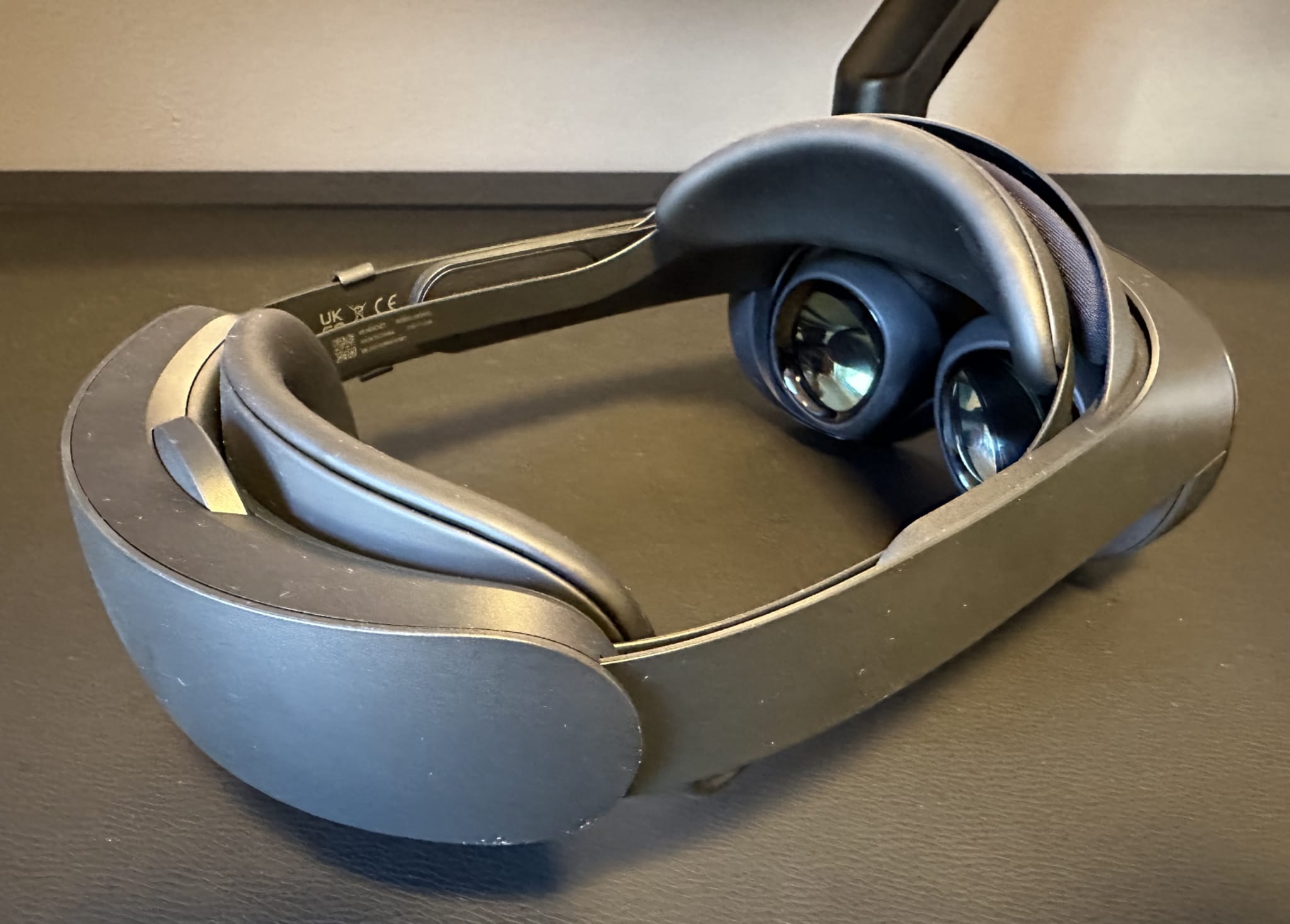 In my opinion, this design makes a big difference and I certainly prefer the Meta Quest Pro over the Meta Quest 2 for prolonged usage (even with the Elite Strap. With that said, Virtual Reality headsets are highly personal, similar to earphones, therefore individual comfort will vary.

The new pancake lenses reduce the size of the optical stack by 40% compared to the Meta Quest 2. They work by folding light inside the optical module, delivering 75% greater contrast with a 1.3x larger colour gamut. 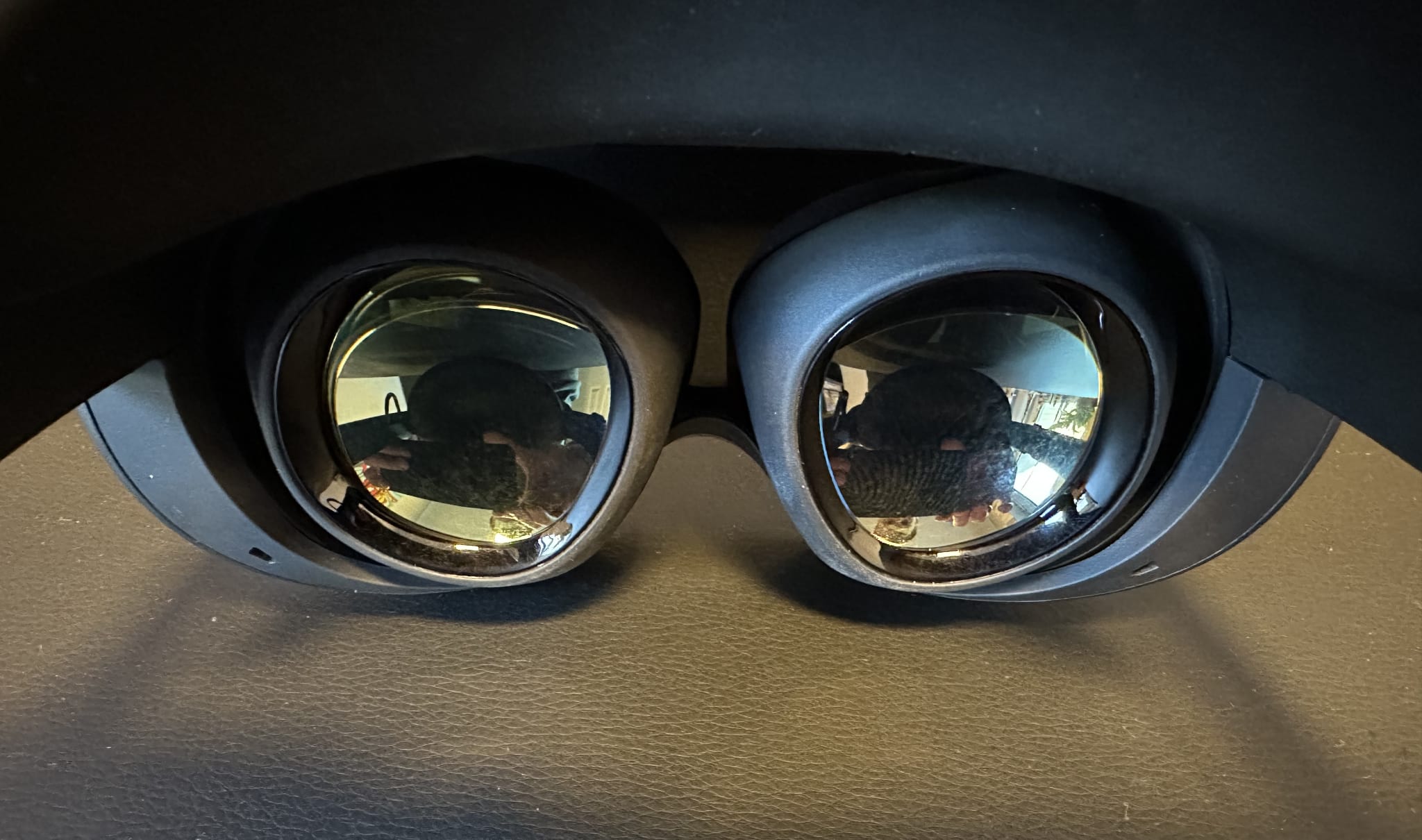 The difference is immediately noticeable, positively impacting the design of the headset and image quality when used. For example, the Meta Quest Pro is not prone to lens flaring, which is a common complaint with existing Virtual Reality headsets.

Unlike the previous Touch Controllers, the Touch Pro Controllers are self-tracked, meaning that each controller has three cameras and a dedicated Qualcomm Snapdragon 662 SoC. 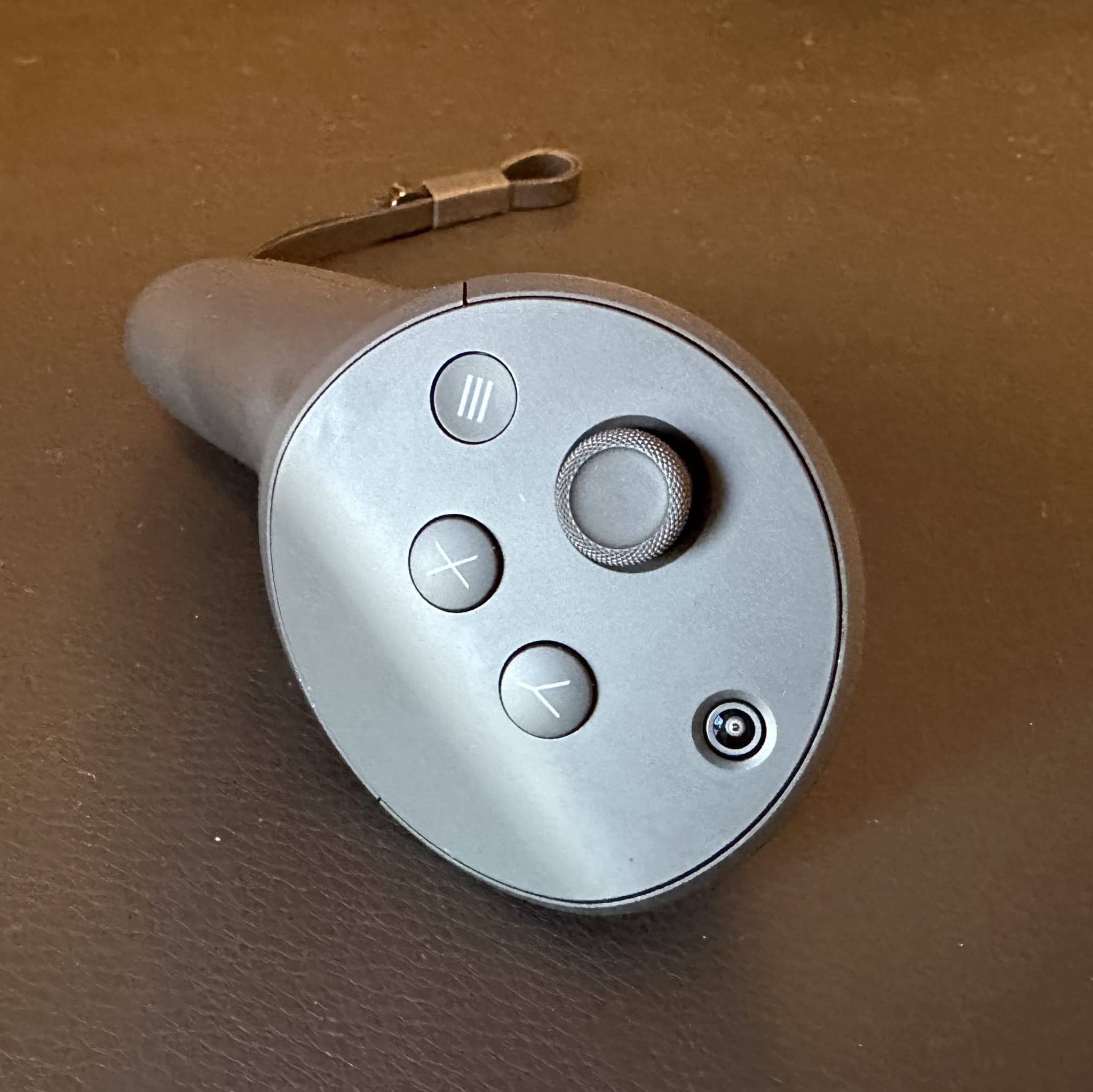 The removal of the sensor ring and the ability to track independently from the headset is a major positive. However, the extra horsepower forces a shift to rechargeable batteries, providing up to eight hours of battery life.

In use, the Meta Quest Pro feels exactly like the Meta Quest 2. Although the Meta Quest Pro targets business use cases, the software (operating system) is identical to the consumer range. In fact, there are no obvious enhancements that specifically target businesses. As a comparison, the Microsoft Holo Lens 2 supports a wide range of industrial standards, such as ISO 14644-14, ISO Class 5.0, UL Class I, and Division 2.

First-party applications such as Meta Horizon Worlds and Meta Horizon Workrooms are available for the Meta Quest Pro and do (in theory) support the new features, such as eye tracking.

However, even with billions of dollars invested by Meta, these applications continue to be very underwhelming. At this point, they feel like a rehash of ill-fated applications such as PlayStation Home, whilst being riddled with bugs, delivering an almost unusable (but sometimes comical) user experience.

Thankfully, there are some good third-party applications (designed for the Meta Quest and Oculus range of headsets), that all work as designed on the Meta Quest Pro.

Unfortunately, although the new features, such as eye tracking and the improved mixed reality mode can be generically enabled from the settings, individual applications require a specific software update to ensure full compatibility.

At the time of writing, there were very few third-party applications that demonstrated these features effectively. Therefore, it is difficult to determine their overall impact compared to other headsets that lack these features.

What I can state is that although the high-definition front-facing cameras certainly improve the Mixed Reality mode (compared to the Meta Quest 2), the quality is still unacceptable for everyday use.

For example, reading text in the “real world” through the Meta Quest Pro is very difficult, generally requiring the text size to be increased. 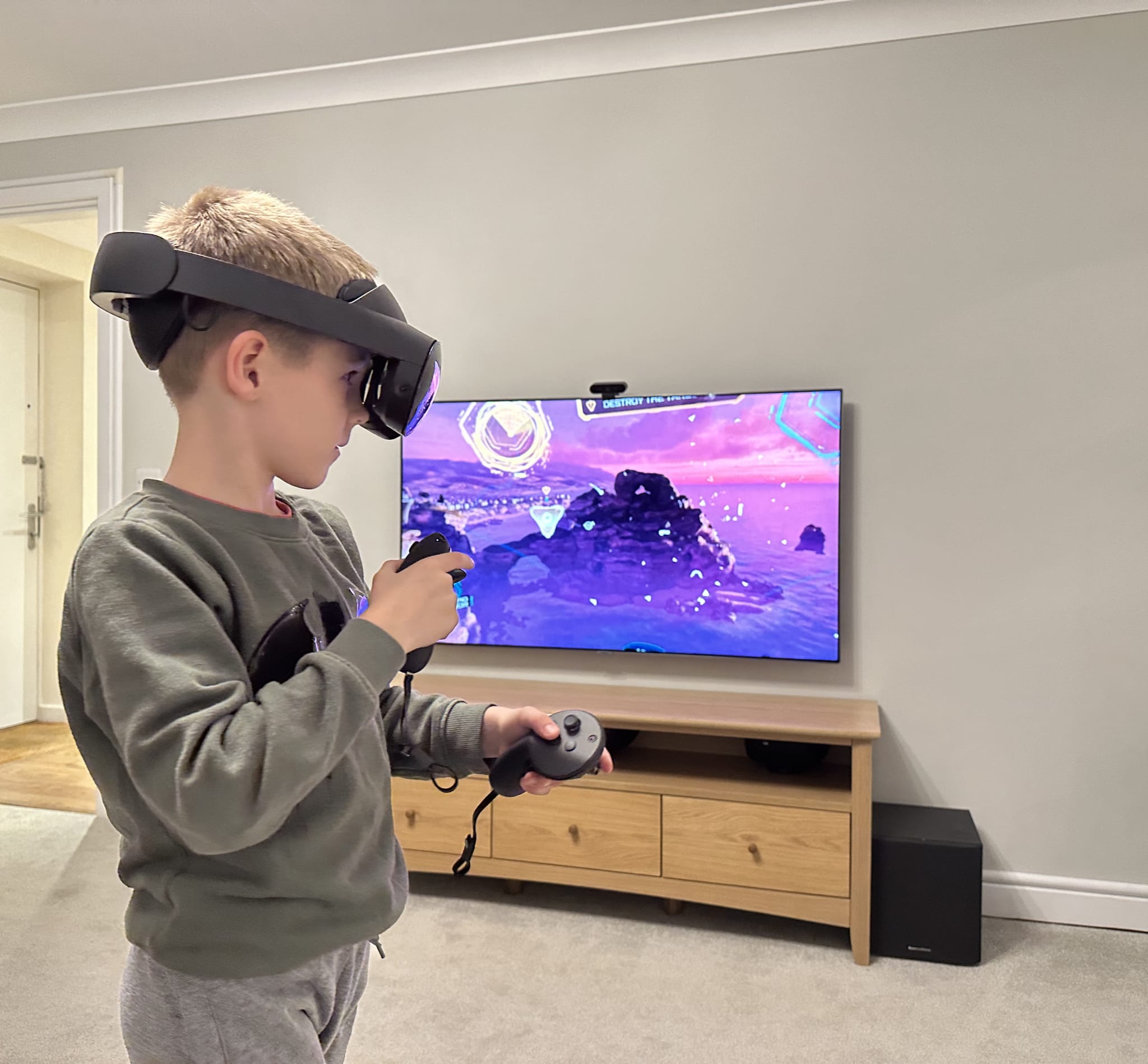 As a result of this design decision, there is a significant amount of light leakage from the sides and bottom. In theory, this is a negative for Virtual Reality, but a potential positive for Mixed Reality.

The Meta Quest Pro design even looks similar to the Holo Lens 2, as demonstrated by my son. Can you spot which headset is the Meta Quest Pro? It is not immediately obvious.

I expected to dislike these design choices, thinking they would break the immersion of Virtual Reality and potentially contribute to motion sickness.

However, surprisingly I did not find it to be an issue. After a few minutes of wearing the Meta Quest Pro, my focus recalibrated and essentially ignored the light leakage when using Virtual Reality applications.

Looking at the Meta Quest Pro headset in isolation (ignoring all other headsets and the price), my initial impressions are mostly positive.

The headset is well built and demonstrates potential, with advanced features such as pancake lenses, eye tracking, front-facing cameras, etc.

I do believe it suffers from attempting to bridge the gap between Virtual Reality and Mixed Reality, essentially compromising both modes. However, it still performs well enough to make it the best overall Virtual Reality headset I have used to date.

The video below shows my son playing Iron Man VR.

Unfortunately for Meta, the Meta Quest Pro is not the only headset on the market and the price is difficult to ignore when comparing features that most (consumer) users desire.

Therefore, if you are looking for a good quality consumer virtual reality headset for playing games, etc. You should purchase the Meta Quest 2 (£399) or PICO 4 (£379.99) (not the Meta Quest Pro). Alternatively, wait for the inevitable Meta Quest 3, which I would expect to be announced in 2023 and could even include more advanced features, such as a new System on a Chip and 120Hz Refresh Rate.

If you are a business, looking to explore Mixed Reality and the “Metaverse”, the Meta Quest Pro is an interesting option. However, consumer-centric software, poor quality first-party applications and limited business-centric features reduce its relevance, resulting in a questionable return on investment.

I am excited to see how the Meta Quest Pro evolves and where Meta goes next.