The Linux community has been patiently waiting for the first Linus Tech Tips (LTT) Linux Challenge video to drop.

The Linux Challenge is a five-part series where Linus and Luke have agreed to commit to Linux as their primary gaming system for one month, documenting their experience.

If either Linus or Luke “fail” and are forced to go back to Windows, they must complete a forfeit. Knowing that Luke has previous experience with Linux, I suspect he has a higher chance of success.

As highlighted by the Steam Hardware and Software Survey, Linux has approximately 1% market share, demonstrating a steady (but minor) increase over time.

LTT is the largest tech channel on YouTube by video views and the eleventh largest by subscribers (with more than 14 Million). Therefore, any video published by LTT has the potential to influence a massive audience.

Part one of the Linux Challenge is now available (video embedded below).

Without question, the most controversial part of the video was the choice of Linux distribution (Pop!_OS) and the error encountered by Linus at 09:57, which resulted in him removing essential packages required by the operating system.

In June, I switched from Fedora to Pop!_OS as my primary Linux distribution and have written several articles describing my rationale and setup.

One of the reasons I like Pop!_OS is the “out of the box” experience, delivering what I consider to be the closest equivalent to the Apple “it just works” mantra.

Therefore, I watched in horror, as Linus essentially “killed” his system whilst simply trying to install the popular game launcher Steam.

To understand what happened, the image below provides a closer look at the warning message. 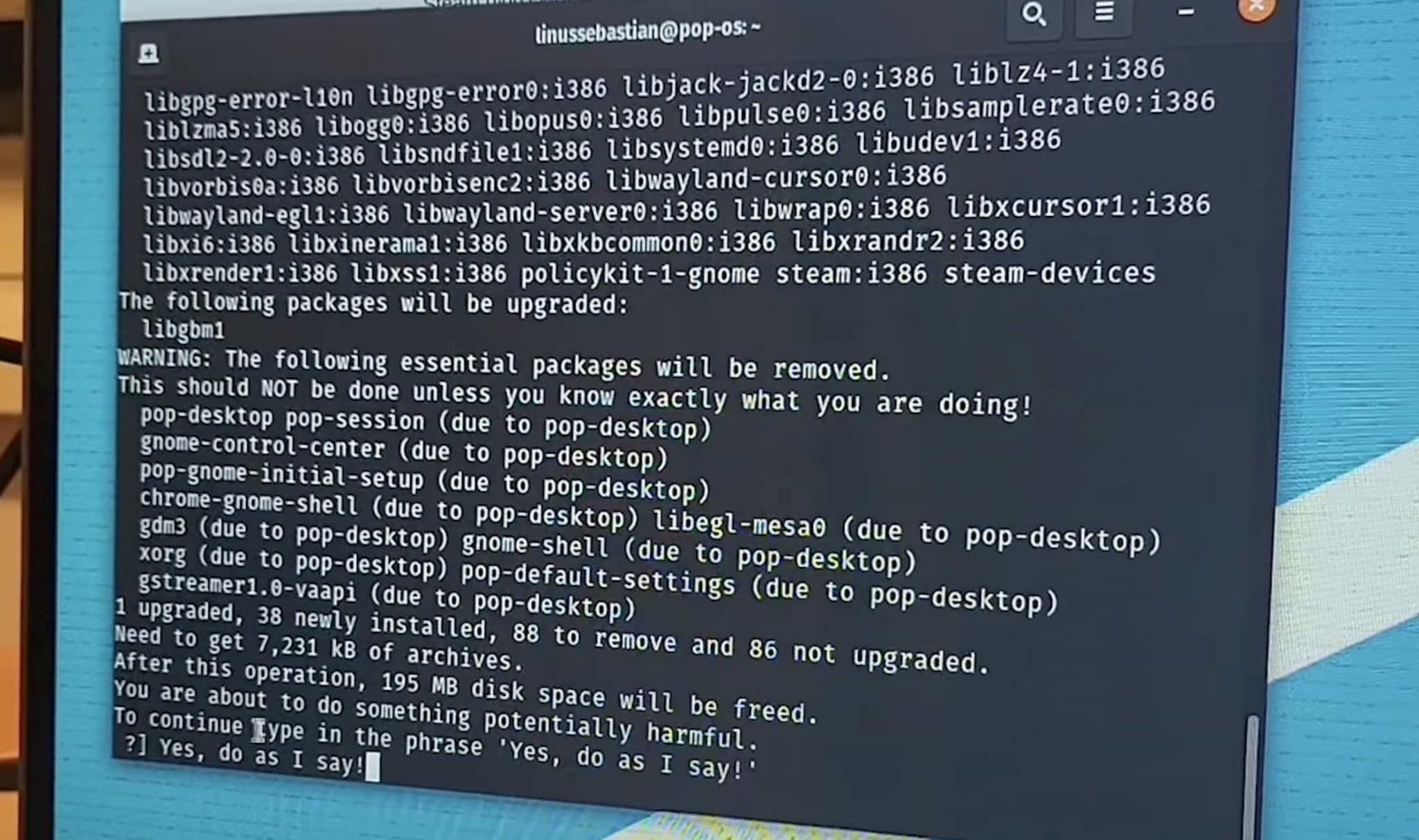 The warning clearly states that the following packages will be removed.

Anyone with Linux experience will immediately identify these packages as critical, knowing they enable the Pop!_OS Desktop Environment (COSMIC, GNOME, Xorg), otherwise known as the Graphical User Interface (GUI).

Therefore, I suspect this warning and the resulting outcome, will generate a lot of discussion amongst the Linux community. Was this a user error or is Linux to blame?

In my opinion, it is a bit of both but ultimately highlights that even a competent technologist must have a basic understanding of Linux to be successful.

The issue originated from a bug, which has subsequently been fixed. This bug would have been resolved if Linus would have had an internet connection enabled during the installation of Pop!_OS or completed a system update post-installation.

In my opinion, a system update is best practice with any operating system (Linux, Windows, macOS) following a fresh installation, as you can almost always guarantee there will be updates and bug fixes.

With that said, as a new Linux user, a simple application installation should never “break” the system.

In fairness, when Linus tried to install Steam from the Pop!_Shop, it simply failed, successfully protecting the system.

However, the error message was essentially useless for a new Linux user, not providing any valuable path to resolution. For example, it could have prompted the user to update their system and try again (which in this case, would have resolved the issue.)

When Linus switched to the Terminal, the installation of Steam generated the same error as the Pop!_Shop, but also provided a (bad) path forward.

Knowing the ramifications of this action, Linux forces the user to manually type the phrase “Yes, do as I say!”. This additional step is designed to warn the user that the following actions could result in unforeseen consequences.

Unfortunately, like the majority of users, Linus did not stop to consider the warning message, instead deciding to proceed regardless (we have all done it).

At which point, Linux executed the exact actions as requested by the user, including the removal of the Pop!_OS Desktop Environment.

Therefore, I feel the “blame” is split between the user and Linux, knowing that both could have acted differently to prevent this outcome.

Overall, the biggest disappointment is that this experience triggered Linus to switch his Linux distribution from Pop!_OS to Manjaro. Although I also like Manjaro (as highlighted in the article Linux Distributions), I do believe the “new user” experience is better on Pop!_OS.

I also believe Linus would be better served by a Debian-based Linux distribution, instead of Arch Linux, which in my experience can have a steeper learning curve.

As a fan of Linux and Pop!_OS, I am not disheartened by this outcome. Linux still has a long way to go before it is ready for general consumers and I hope that this series of honest videos will help shine a light on areas that need improvement.

It will be interesting to see how the Linux community (and System76) respond (get ready for a lot of memes) and I look forward to watching the rest of the series.

System76 have responded to the issue Linus experienced with Pop!_OS.

“For some reason, an i386 version of a package was never published on Launchpad. Steam being an i386 package when trying to install it, it had to downgrade that package to the Ubuntu version to resolve dependencies, which removed Pop!_OS packages.”

As I had hoped, the issue has also triggered System76 to patch APT, preventing users from accidentally breaking their system via the Terminal. As with all things Linux, this protection can be overwritten but requires a specific user intervention.