As a hobbyist independent game developer, I am a long-time user of the Game Creation System (GCS) GameMaker Studio 2 by YoYo Games (owned by Opera).

GameMaker Studio 2 targets 2D games, which means it is not as versatile as other popular game engines such as Unreal Engine, Unity, or Godot.

However, it is very beginner-friendly and includes excellent multi-platform publishing support, making it a great choice for anyone looking to create platformer or top-down games, such as shooters, role-playing, racers, Metroidvania, bullet hell, etc. It is also great for prototyping, thanks to the highly accessible, integrated workflow.

As an example, I am currently working on a 2D platformer called Ninja Caves, developed for my son (six years old). The game is inspired by Crystal Caves and is available for Windows, macOS and iPadOS.

I have documented the development process in the following articles.

Although GameMaker Studio 2 can publish games for Linux, the IDE has historically been restricted to Windows and macOS.

I was personally excited by this announcement, as it takes me one step closer to my platform-agnostic (e.g. Windows, macOS, Linux) goal for my common software library.

At this time, YoYo Games are only offering a Debian Linux package, with support for Ubuntu. However, as I recently switched to Pop!_OS as my primary Linux distribution, which is Ubuntu-based, the package should be compatible.

I am pleased to report the installation was completed successfully, with no errors or warnings. Although I did need to download the package from the GameMaker Studio Community forum via Firefox, as it refused to download using Chrome.

With the latest runtime installed (v23.1.1.329), I loaded my active project, Ninja Caves. The source code for Ninja Caves can be found on GitHub. 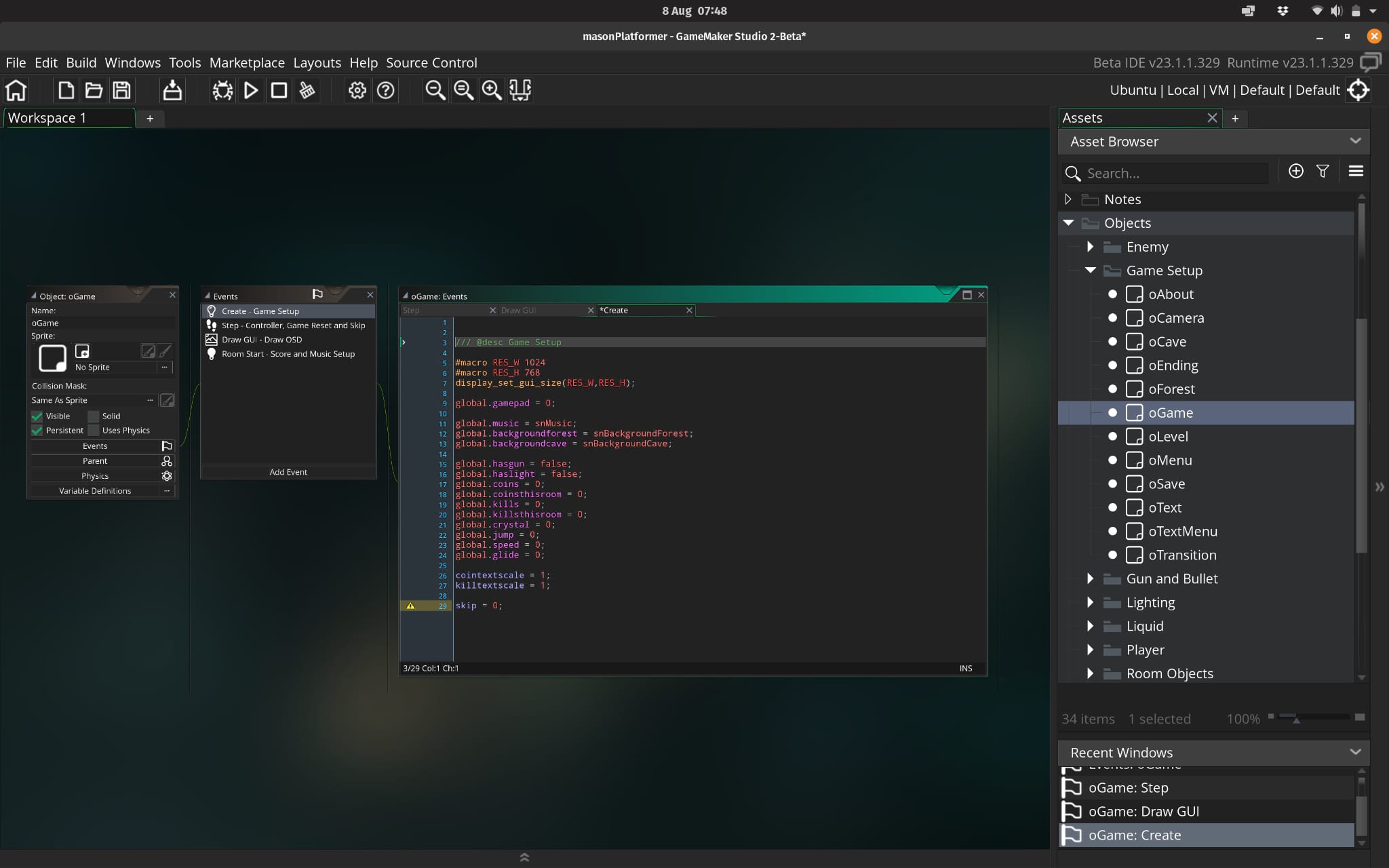 Ninja Caves includes a wide range of custom assets, specifically Fonts, Objects, Rooms, Scripts, Shaders, Sounds, Sprites, and Tile Sets. All assets are present and correct on the Linux build, with no obvious bugs or limitations.

Ninja Caves also incorporates particles and GPU controller functions, specifically extended blend modes to enable “baked lighting” across the levels. These features can be temperamental when working across multiple platforms, but I am pleased to report that they appear to be working as designed within the IDE and the VM (interpreted code).

The only issue I have identified (so far) relates to the embedded debugger, which currently fails to run. The debugging overlay itself launches, but the game runner fails to load. If I build the game outside of the debugger, everything works as designed.

Finally, although I have not objectively tested the performance of the IDE or build process, it “feels” responsive. Similar to what I experience on Windows and macOS. This is a great outcome, considering the pre-release nature of the build.

In conclusion, the release of GameMaker Studio 2 for Linux, alongside the recent announcement from Valve regarding their Linux-powered Steam Deck, makes me excited about the future of gaming (and software in general) on Linux!

I am not yet ready to declare this “the year of the Linux desktop”, but things are certainly trending in the right direction.

In summary, they have removed the existing perpetual licensing options, replacing them with a three-tier subscription model (monthly or annual).

Ordinarily, I would be nervous about any switch to subscription-based licensing. However, knowing that the base tier is free and unrestricted for development, provides a lot of flexibility. For example, a license is only required to publish/export a game, which for many hobbyist/independent developers could be covered by a single month.

As with any change of this type, I am sure YoYo Games will receive a lot of community feedback, therefore, I would recommend keeping an eye on the following channels.

Finally, it is worth noting that anyone with a perpetual license (like me) will retain that license for the life of GameMaker Studio 2, even if you decide to “upgrade” or purchase a new subscription license.

YoYo Games are also offering incentives to licence holders, allowing for multi-month trials of the new subscriptions tiers. For example, I have a free six-month trial for Enterprise, which unlocks the ability to publish/export for consoles.