The UK is the fifth largest video game market in the world, with approximately 32.4 million people playing games, resulting in a consumer spend of £4.33 billion in 2016 (expected to grow to £5 billion in 2017).

I consider myself a hobbyist, someone who enjoys developing simple video games, with no pressure, expectation or desire to achieve a financial return.

I have always enjoyed top-down shooters (e.g. Asteroids / top-down racers (e.g. Super Sprint) and believe these “retro” games remain highly accessible, compelling and fun. For example, the video below highlights the Atari Super Sprint Arcade Machine, which I loved playing as a kid!

Games such as Super Sprint are relatively easy to develop and thanks to their short play duration, perfectly matched for modern devices such as smartphones, tablets, etc.

Although I would love to master advanced 3D game engines such as the Unreal Engine or Unity, the time and effort required would be significant, thankfully 2D game engines are far more accessible.

It supports drag and drop (declarative development), as well as a proprietary scripting language known as GameMaker Language (GML), which is based on C.

As an example, the critically acclaimed Hotline Miami was built using GameMaker. Although the core concept and graphics are relatively simple, the game is highly addictive and great fun.

If you are not familiar with Hotline Miami, the GameSpot video review (embedded below), provides a good overview.

Hotline Miami can be purchased on Steam for £6.99.

DnD does still require a basic understanding of programming, for example, variables, conditionals constructs, etc. However, assuming you are comfortable with this terminology, the process of developing is as simple as dragging and dropping pre-defined building blocks and configuring specific options. 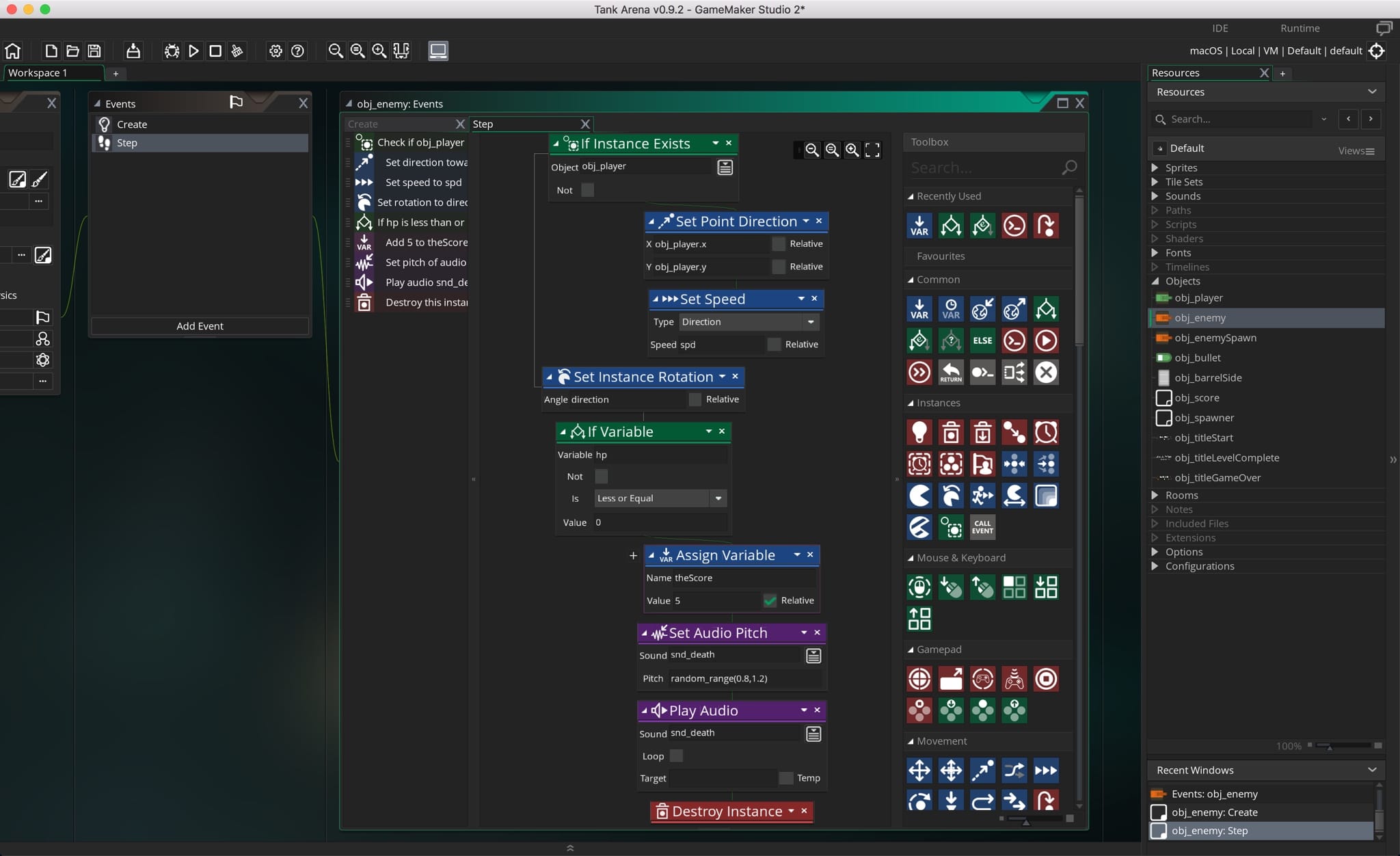 The logic outlined in the image instructs the game engine to move the enemy towards the player and trigger a certain action if the enemy health (hp) is equal or less than zero.

To unlock the full power of GameMaker Studio, you will likely need to leverage the GameMaker Language (GML). Thankfully, it is possible to view the code behind DnD actions, providing a simple way to start learning.

Similar to DnD, GML is relatively easy to learn. Although not completely representative of real-world usage, the code below outlines a simple movement event.

As you can see from the code, if a specific keyboard input is detected, the object will move based on the corresponding x/y-axis.

GameMaker Studio is not the only Game Creation System on the market and I can not claim to have tested them all, however I have used Stencyl and Construct which are both excellent, but overall I believe GameMaker Studio is the most comprehensive and enjoyable to work with.

GameMaker Studio includes a trial license, however, a paid license is required to export games. Frustratingly, the license model is a little restrictive, forcing you to select a specific platform (e.g. Desktop, Web, Mobile, etc.) I own the “Developer - Desktop” license, which is permanent, costs £70 and enables exports to Windows, macOS, and Ubuntu.

Finally, It is worth recognising that GameMaker Studio has a vibrant community, with thousands of forums, videos and asset libraries available to help support your development.