Today I received a Nintendo Switch, a new video game console that attempts to bridge the gap between home and handheld gaming.

After the failure of the Wii U (selling only 14 million units worldwide), the Switch is possibly the most important console release in Nintendo’s 127-year history.

The video below provides a good overview of the Switch in action.

The Switch follows a similar design philosophy to the Wii U, delivering a portable “tablet-like” GamePad, which can be used standalone or connected to a television. However, where the Wii U simply streamed video to the GamePad from the Wii U console, the Switch incorporates the actual console within the GamePad itself. This is an important distinction as it makes the GamePad truly portable, instead of being restricted to one location.

You may question why Nintendo have decided to continue with this product philosophy. Referencing the Financial Times infographic below, the two most successful consoles in Nintendo’s history were the original Wii and DS. 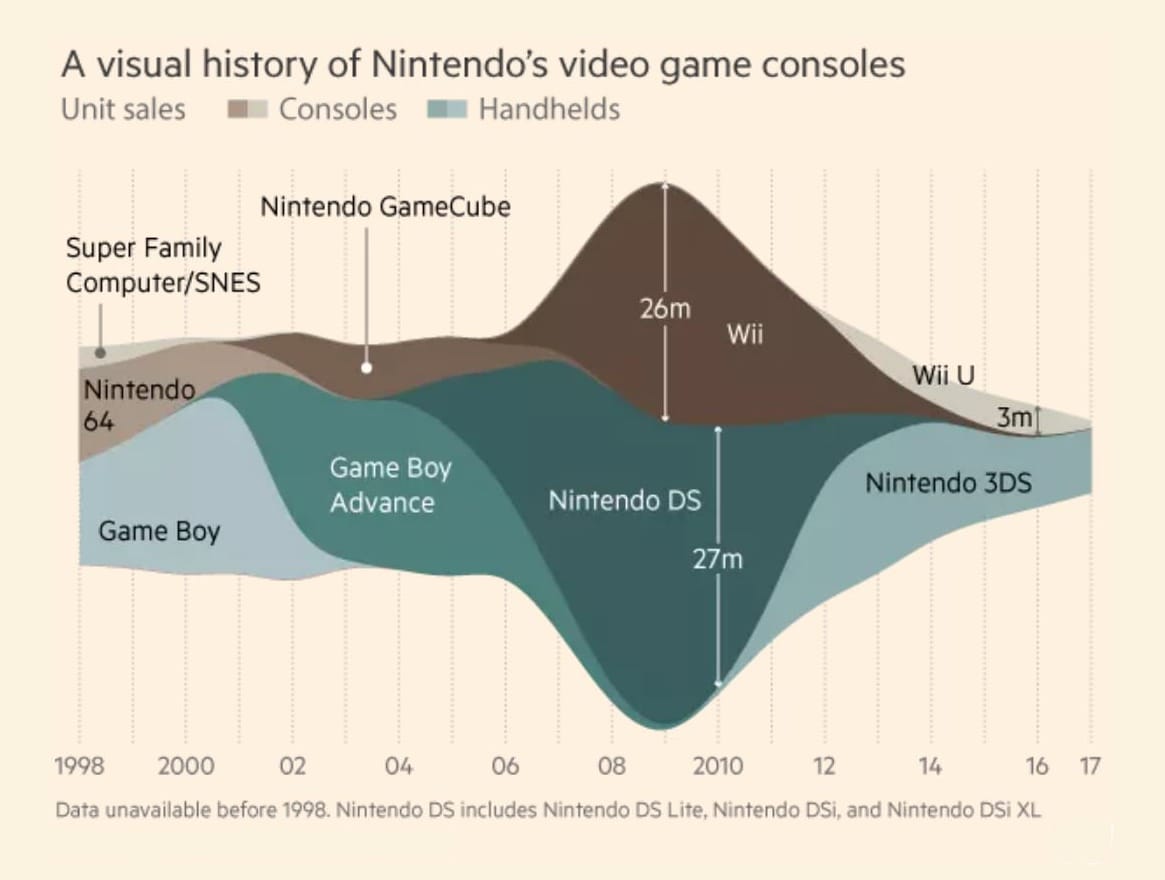 The original Wii (2006) was one of the most successful home consoles of all time, selling over 100 million units worldwide. This was primarily thanks to clever market positioning, where Nintendo successfully broadened the gaming demographic to include the entire family (from young children to grandparents). The Wii also introduced an intuitive motion controller, which provided a unique selling point.

The DS (2004) is the most successful handheld video game console of all time, selling over 150 million units worldwide. Like the Wii, it was also “family friendly” and differentiated itself using two displays and touchscreen technology.

In short, the Switch attempts to bridge these two worlds, providing a “Wii like” home console experience with improved motion controls, as well as the ability to go handheld with a touchscreen GamePad. The focus is still on the broader gaming demographic (family friendly), but the Switch also attempts to win back mainstream gamers with a more mature, professional design and branding.

In theory, this strategy will also allow Nintendo and third-party developers to maximize their return on investment, enabling them to focus development on one console, instead of multiple.

Will Nintendo succeed? Here are my first impressions…

Like all entertainment, gaming is very subjective. Therefore, before I provide my initial thoughts regarding the Switch, I thought it would be useful to share some insight in to my gaming interests.

I definitely consider myself a casual gamer, rarely playing for more than six hours per month. My interest in gaming can be covered in three areas:

As you might have noticed, I enjoy cinematic, story focused games, which are predominately single-player with RPG elements.

I almost exclusively play games on a PC or console, very rarely on a tablet or smartphone. I do own a PlayStation Vita, but due to poor developer support, it rarely gets used.

The Switch itself is incredibly well built. Unlike the Wii U, it looks and feels like an expensive piece of technology.

The 6.2-inch LCD display supports a 1280x720 resolution. This might sound low in the era of 4k, but at 237 pixels per inch, the quality is excellent. The 720p resolution also helps with games, as developers can target a less taxing resolution and still achieve a 1:1 mapping.

The Joy-Con controllers are arguably the most innovative and impressive part of the Switch. As shown in the image below, they can be connected to the Switch itself and used as a traditional handheld video game console (like the PlayStation Vita). 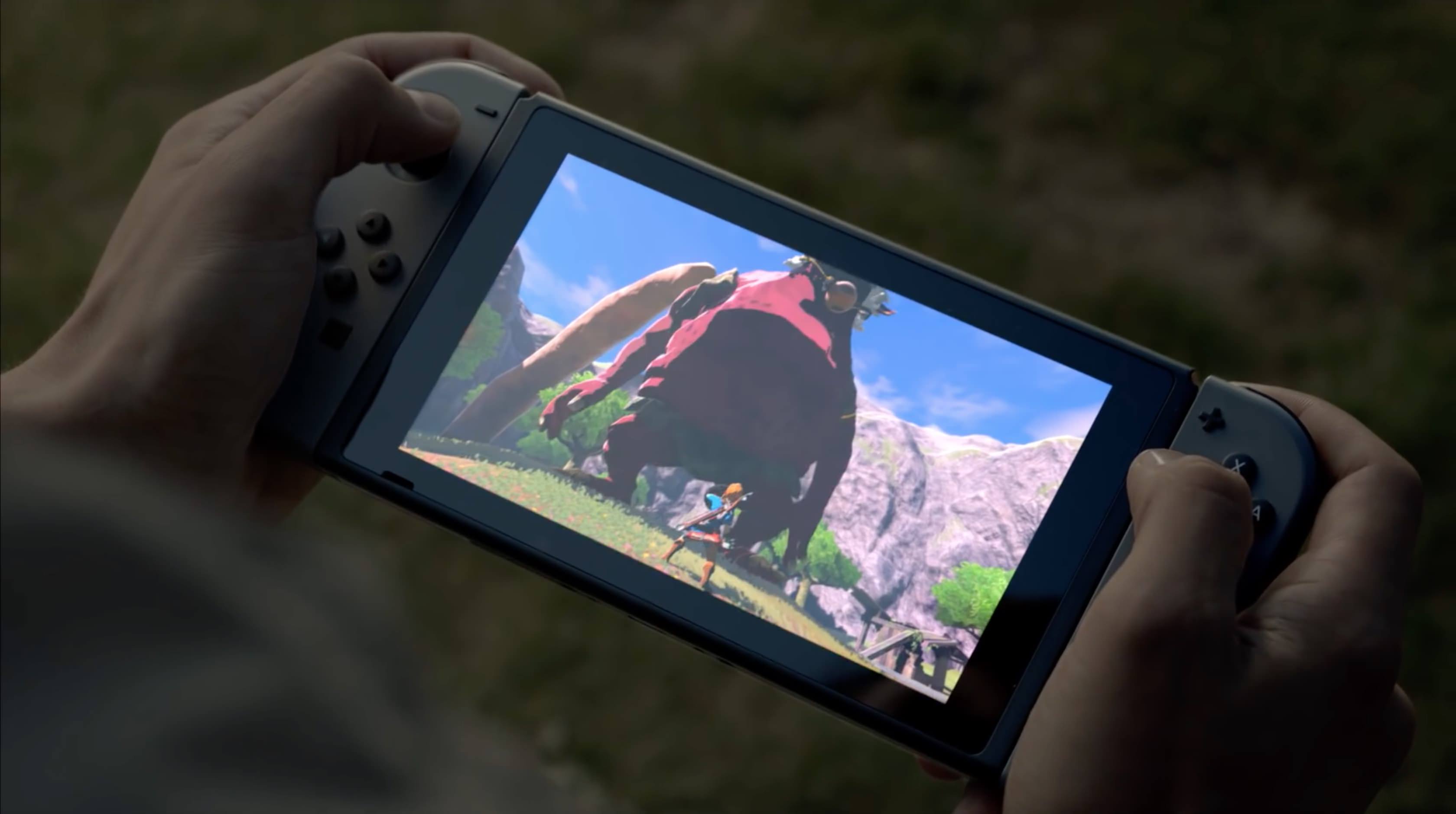 The Joy-Con controllers can also be disconnected from the Switch and used independently or connected to the Joy-Con Grip (an included peripheral). 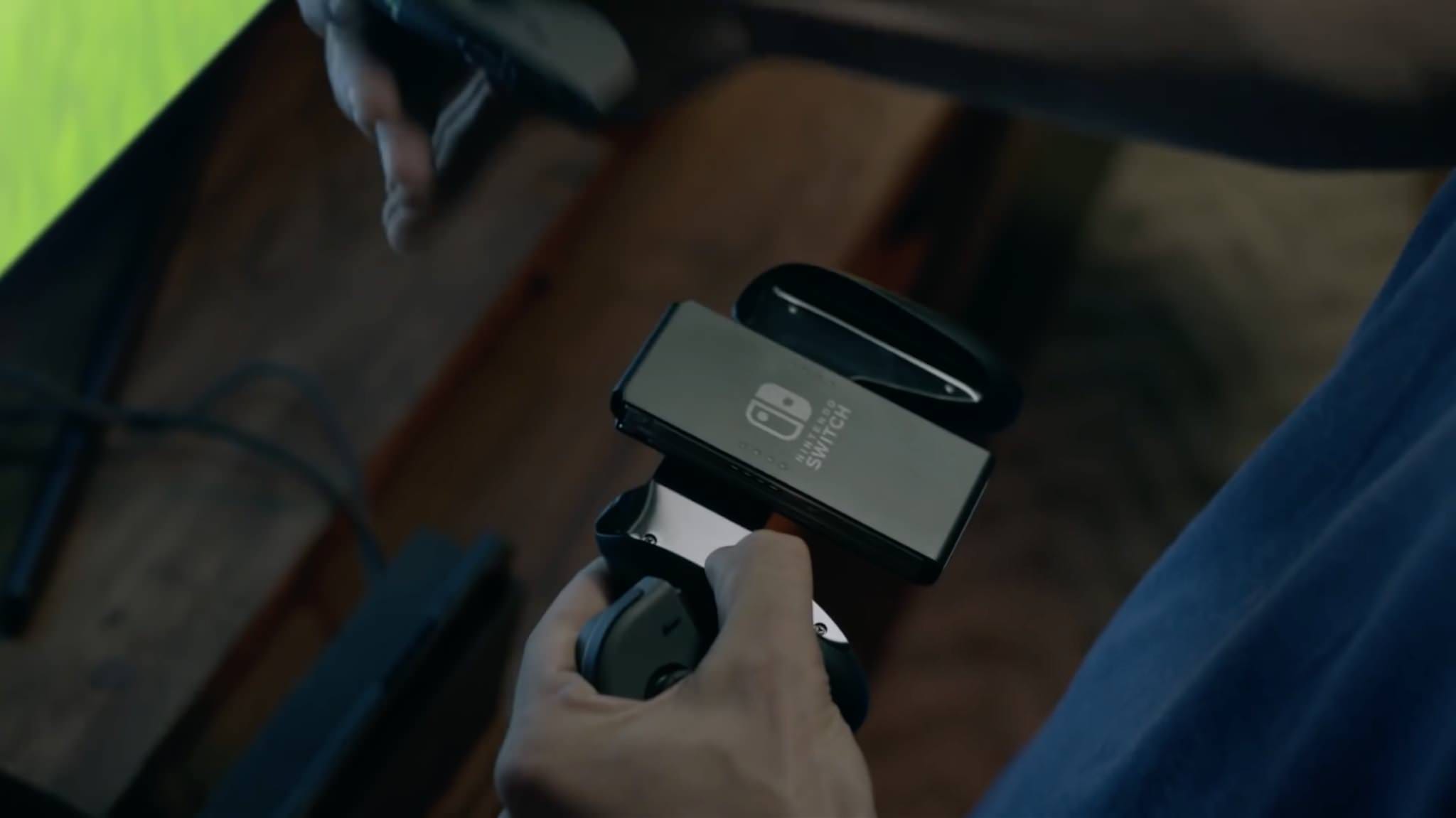 I have found myself using both configurations, even switching mid-game. For example, when simply exploring the world in Zelda: Breath of the Wild, having the Joy-Con controllers independent provides a very relaxing play style. However, in the heat of battle, I have found the more traditional layout provided by Joy-Con Grip improves my accuracy.

When playing in these configurations, the Switch itself is either docked (outputting to the television) or stood on a flat surface using the integrated kick-stand. 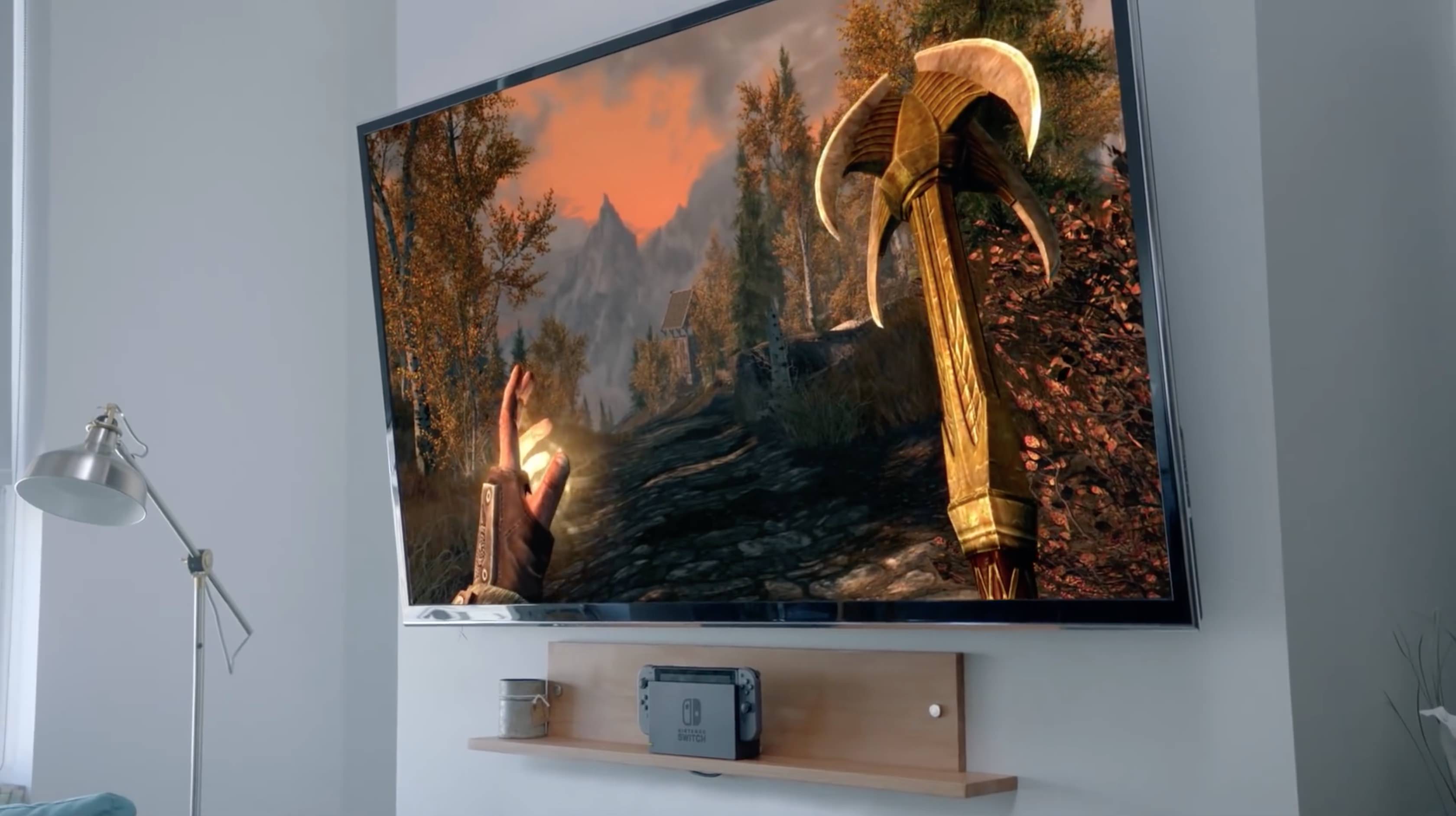 Finally, the Joy-Con controllers can be split and shared, allowing for local multi-player. Due to the small size of each Joy-Con, this configuration looks slightly ridiculous, however it is surprisingly usable. I would argue the left Joy-Con is slightly more comfortable, thanks to the placement of the analogue stick, but both work well for quick, ad-hoc gaming sessions. 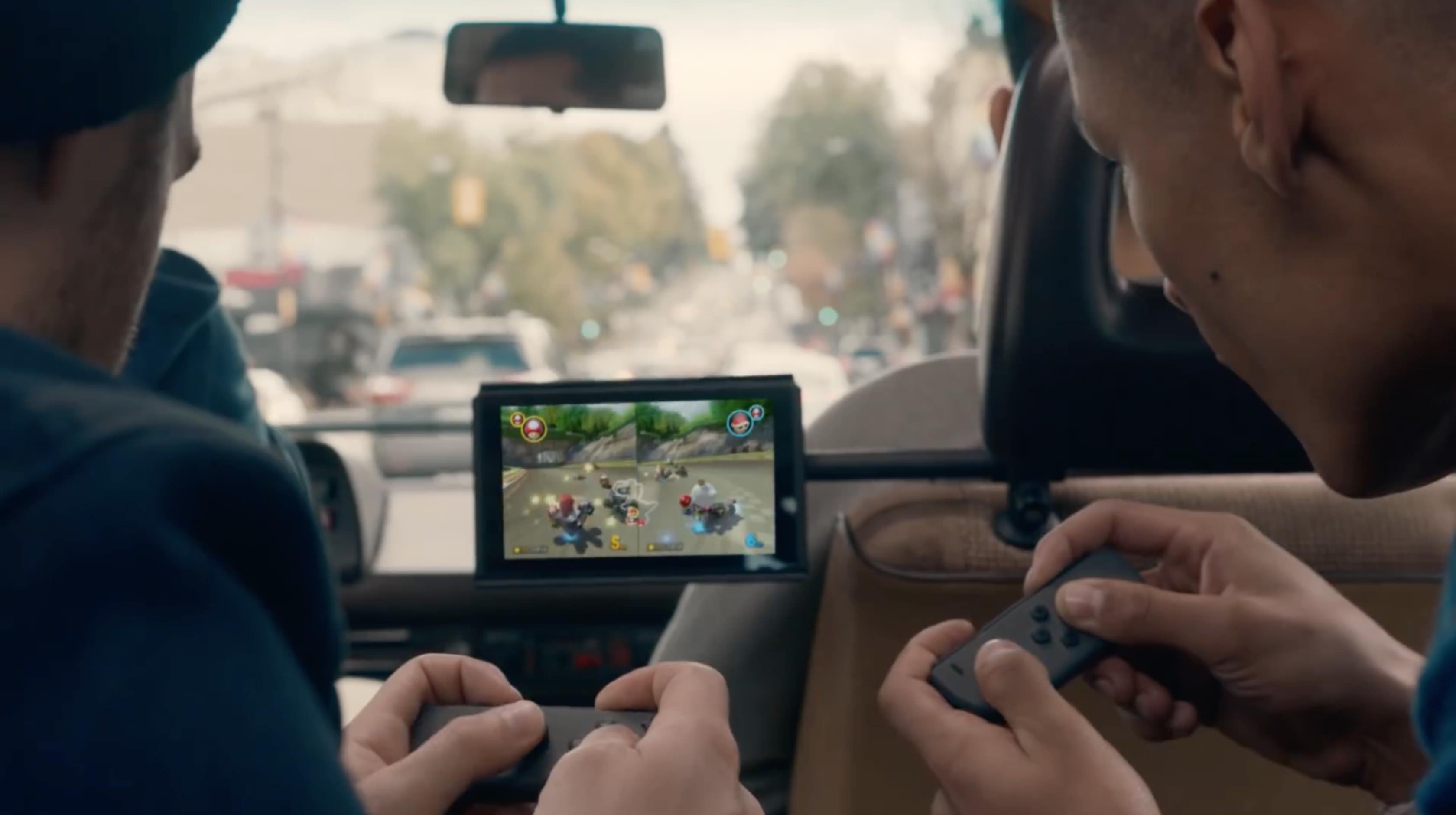 Overall I have been very impressed with the Switch hardware, specifically the Joy-Con controllers. Although they look small and fragile, I have found them to be very comfortable and robust. They are also packed with technology, including traditional gaming buttons, an accelerometer, gyroscope, infrared depth sensor, Bluetooth, Near-Field Communication and haptic feedback.

The only disappointment with the hardware is the previously mentioned kick-stand, which is flimsy and poorly positioned, as you can’t charge and play simultaneously and the Switch feels like it could topple over at any time. This is a minor complaint, but a little surprising when you consider the otherwise excellent build quality.

There is not much to say about the software on the Nintendo Switch, simply because the operating system is incredibly lightweight

In short, you are provided with a simply row of tiles, with some basic features to manage screenshots, system preferences, etc. 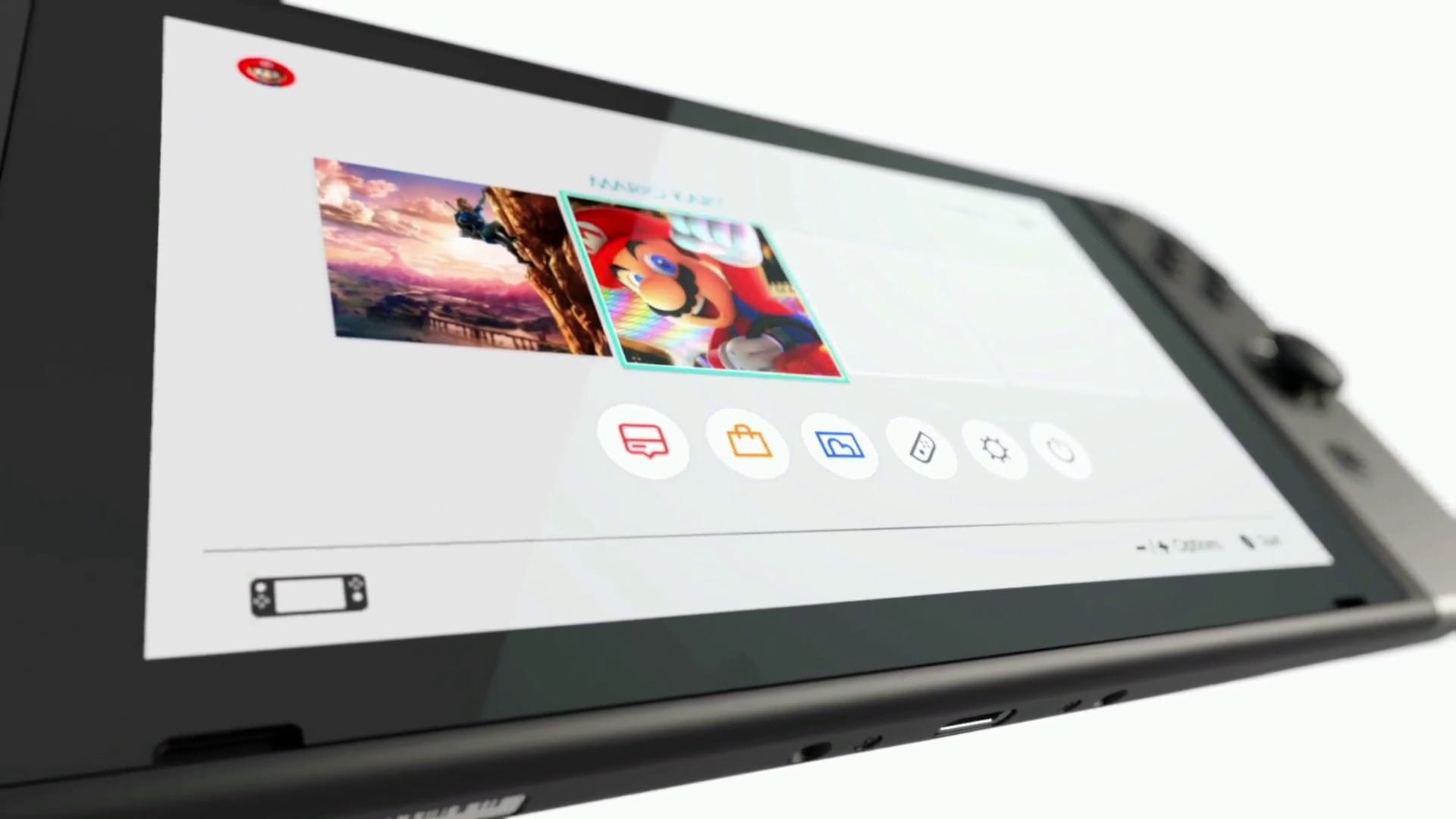 This minimal approach is not necessarily a bad thing, as it would appear Nintendo have focused on getting the basics right. For example, the console feels very responsive and load times are impressively short (especially when compared with video games consoles that rely on spinning media).

Nintendo have also nailed the most important feature of the Switch, switching between docked and handheld. Dare I say this is almost a magical experience, where you can be mid-game and simply dock or undock the Switch without any interruption.

The Switch doesn’t yet support any other type of entertainment (streaming music and video) and the included store is embarrassingly basic, however I am confident these things will improve over time.

As a result, although the Switch software does not include any flashy features, it has delivered rock solid stability, that is fast and simple to use.

The CPU cores are clocked at 1020MHz, while the GPU cores vary between 307.2MHz and 768MHz when the Switch is docked. The memory speed is also variable, running at 1331MHz and 1600MHz when docked.

Although the Switch specification is not ground breaking and it certainly won’t rival the PlayStation 4 Pro or a gaming PC, it is still impressive, especially when you consider it is a handheld video game console.

As proof of its potential, the video below shows Tomb Raider (2013) running at 1080p (maximum settings) on an Nvidia Shield, which is also powered by the Nvidia Tegra X1 SoC.

NOTE: The original video was removed, therefore I have replaced it with a video showing Tomb Raider running on the Nvidia Shield TV, which is representative of the Nintendo Switch.

To think that you could be playing games of this quality on a handheld is an exciting prospect.

Nintendo state the Switch battery can last up to five hours, however this will vary significantly depending on the game. In Zelda: Breath of the Wild, I have been getting closer to two hours, which I believe is adequate, however mainly because I rarely game in a single session for more than one hour.

If you do require more than two hours from a single gaming session, I recommend you invest in an additional AC Adapter and/or an external battery. Thanks to the fact that the Switch uses USB Type-C, external batteries are widely available and reasonably cheap. For example, I would recommend Anker PowerCore 10000 Portable Charger, which is only £20 and provides an additional 6 hours of game time while playing Zelda: Breath of the Wild at 50% screen brightness.

Overall I am very impressive with the Switch. In terms of hardware, software, performance and battery life, I think Nintendo have found the right balance, providing a strong foundation to build on. Any minor complaints that I do have are so small that they are barely worth mentioning.

However, you may have noticed that I have not mentioned the games…

Like most new consoles, the launch line-up for the Switch is a little sparse. In fact, I would state that the only game worth owning is Zelda: Breath of the Wild. The good news is that this game is astonishing and is already one of the highest rated games of all time on any platform (metacritic).

Although I fully expect Nintendo to quickly release several first-party favourites, such as Mario Kart, Super Mario, Mario Party, etc. These games alone will not be enough to drive significant console sales. To achieve real scale, I believe Nintendo will need support from third-party and independent developers.

The reason that this could be a problem is that the Switch is a totally different proposition to the PlayStation 4, Xbox One and PC, which all leverage a similar architecture, making multi-platform releases a simpler process. The Switch is a different beast, with a different architecture and unique characteristics that would need to be targeted directly for the best results.

This is the catch-22, as third-party developers are unlikely to target the Switch unless it has enough sales to support their return on investment, however the Switch is unlikely to sell in large numbers without a strong games catalogue.

As a result, I believe the success or failure of the Switch will not be determined by the console itself (which I believe is a success), instead it will live or die on Nintendo’s ability to encourage third-party developers to target the console.

Let us hope that Nintendo have a strong go-to-market strategy to drive this level of adoption, otherwise all of their hard work may have been for nothing.