In my article “iPad for the Enterprise (2020)”, I shared my workaround to enable offline (local) software development on the iPad. This involved the use of a Raspberry Pi 4, acting as a portable Linux server running Docker.

This article will explain how I achieved this setup, which is not something I would necessarily recommend, but was a fun little technology project.

First, why is this workaround even required? Unfortunately, due to Apple iPadOS restrictions, it is almost impossible to set up, customise and run a local development environment (e.g. Node.js, Ruby) on the iPad. Some applications do let you execute code locally (e.g. Pythonista), but these are often limited to prototyping, automation or simple code snippets.

The simplest workaround to this restriction would be to connect to a remote development environment, for example, AWS, Google Cloud, Azure, Heroku, etc. However, this would require a persistent Internet connection, which is not something I can always guarantee (especially when travelling). Therefore, I desire a local development environment that can be used offline, without an external power source.

When developing on the iPad, I use the following applications:

My frustration was step 5, the remote build process, which is what I mitigated through the use of a Raspberry Pi 4, acting as portable Linux server running Docker. 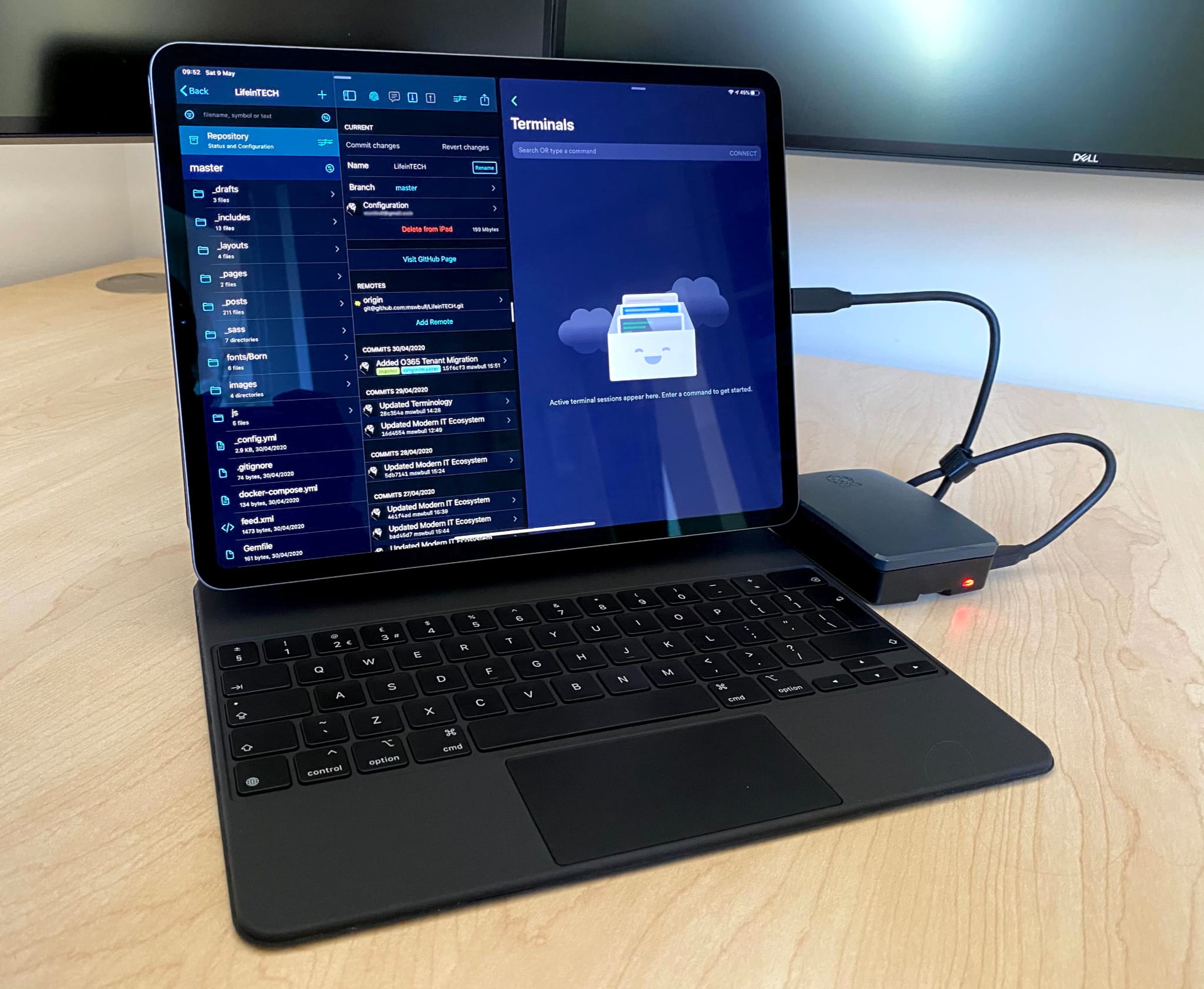 The Raspberry Pi 4 is well-positioned for this job, as it is small, light and cheap, but also very capable (Quad-Core CPU, 4GB RAM, SD-Card Reader). Thanks to the USB-C port, it is also possible to set up a physical network connection and power the device directly from the iPad. This is the “unique” selling point that removes the need for an external network (e.g. Wireless) and an external power source.

NOTE: I have only tested this setup using an iPad Pro (4th Generation - 2020), which comes equipped with a USB-C port. I suspect it would not be possible to replicate with an iPad equipped with a Lightning port.

To get started, I purchased the following hardware.

Although not required in the long-term, I also purchased the following peripherals to help with the initial setup.

The total cost was approximately £60, which is not bad when you consider this is a one-time payment, compared against the ongoing compute/storage costs associated with running a Linux VM in the cloud.

The build process is very easy, simply insert the PCB into the case and load the Micro SD Card. For the initial setup, I connected a Power Supply, USB Mouse, USB Keyboard and HDMI monitor. Once the setup is complete, the peripherals can be removed.

I chose to install Raspbian Buster on the Raspberry Pi 4. The installation process is very simple, made even easier if you purchase a Micro SD Card from “The PiHut”, which comes preinstalled the NOOBS Raspberry Pi operating system.

Once complete, I executed the following eleven steps (leveraging Ben Hardill’s guide) to configure the Raspbian Pi to support SSH and network connectivity over USB-C.

To simplify the process, I removed the SD Card and completed the steps from a Windows PC. The entire process took approximately 15mins.

Add dtoverlay=dwc2 to the /boot/config.txt.

Add modules-load=dwc2 to the end of /boot/cmdline.txt.

Once complete, I shut down the Raspberry Pi and connected it via a USB-C to USB-C cable to the iPad Pro. The Rasberry Pi booted automatically and after a few minutes was accessible from the iPad via SSH using the previously configured IP Address (10.10.0.1).

At this point, the Raspberry Pi can be used like any other Linux based server, installing any required software, etc. To further expand the value, I also configured screen sharing and file sharing, which opens the door to other use cases outside of software development (e.g. file backup, screen sharing, media server, etc.)

There are multiple ways to leverage this setup to complete offline (local) software development on the iPad. I have been following the developer workflow outlined below.

As stated in the introduction, I would not necessarily recommend this setup, as anyone looking to develop offline (local) would be better served by a budget Windows/Linux laptop. However, it does demonstrate what is possible if forced to use an iPad.