I recently shared my experience switching from a 15-inch MacBook Pro to a Lenovo ThinkPad X1 Extreme.

In the previous article, I focused on the hardware differences, however, another area of consideration is the software (specifically the “ecosystem” and associated lock-in). For example, if you use a lot of Apple devices and software (e.g. Mac, iPhone, iPad, iMessage, Apple Music) the thought of switching to Windows can be daunting, especially if you have also purchased a lot of third-party software.

As a result, this article will share my journey from macOS to Windows, including the software I use.

It should be noted that as part of my work, I switch between operating systems a lot. On a regular basis, I will use macOS, Windows, Linux, iOS, and Android. Therefore, I have likely been more careful than most in selecting software and services that do not tie me into a specific ecosystem.

With this philosophy in mind, my transition to Windows was fairly painless. Outlined below are the applications I use on a regular basis on macOS, including the Windows equivalent. 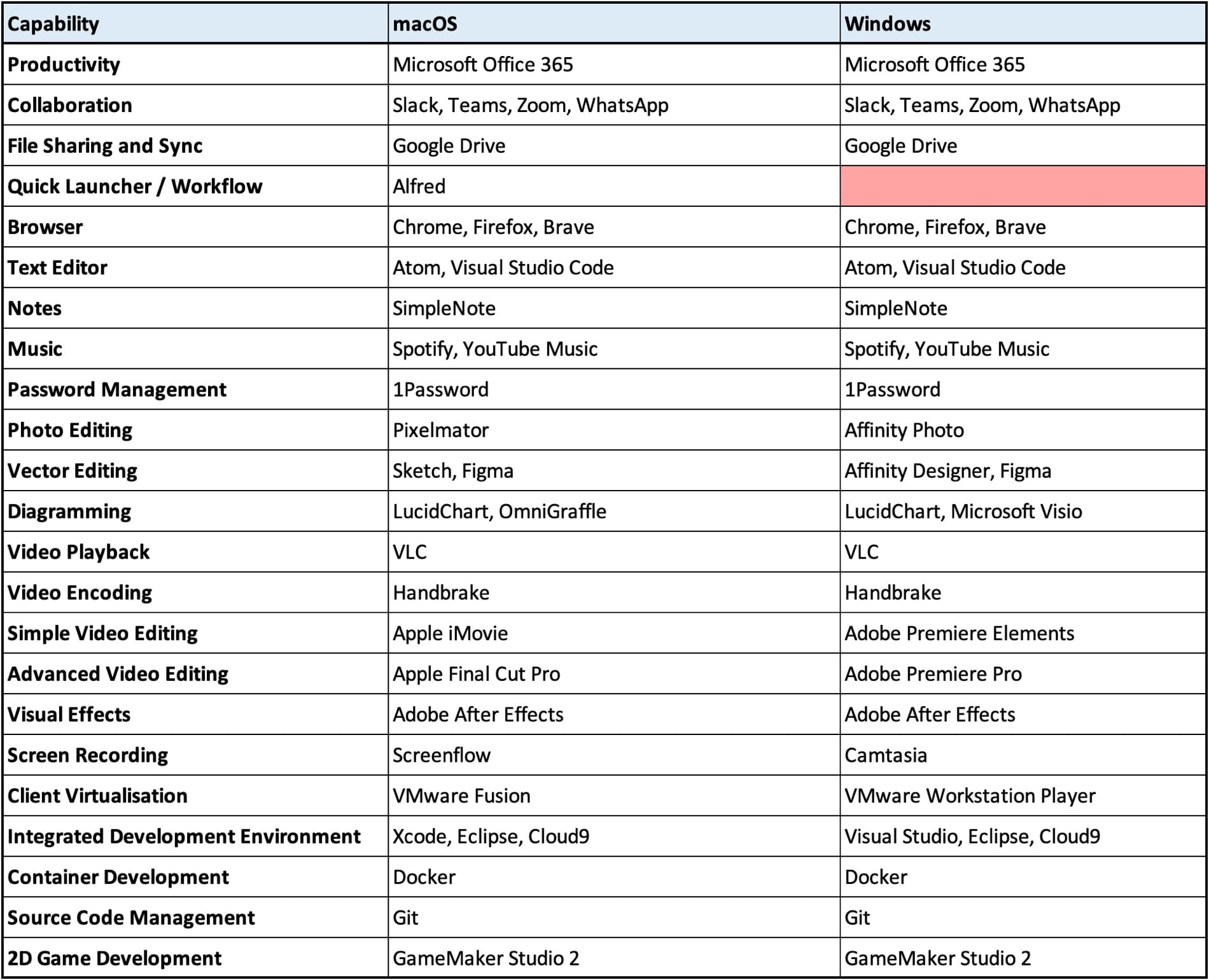 As you can see, thanks to the growth of web technologies and frameworks such as Electron, many applications are now cross-platform. Therefore, the transition to Windows can be achieved with minimal disruption or additional cost.

A few minor pain areas include photo editing and vector editing, where I use Pixelmator and Sketch on the Mac. Thankfully, the Serif Affinity suite of software has gained a lot of momentum in recent years, offering a compelling feature-set at a reasonable price-point. My only frustration is that Serif do not offer a transferable license between Mac and Windows (which would likely make me switch on the Mac side).

Software Development can also be a little tricky, specifically when looking to develop native applications for macOS or iOS. The Xcode Integrated Development Environment (IDE) requires macOS and although there are workarounds, most macOS/iOS developers will likely prefer to remain on a Mac. Thankfully, most of my development is web-based, which, thanks to Docker and other supporting build-tools is easily transferred between macOS and Windows.

The most frustrating gap for me is Alfred, which I use on the Mac to launch applications/files, as well as automate my workflow. There have been attempts to “port” Alfred to Windows, specifically Launchy and Wox. However, in my experience, these tools are very immature and lack the polish offered by Alfred (which is bulletproof). Therefore, I find myself using the native Windows search (by hitting the Windows Key). It is a poor comparison to Alfred, lacking any native workflow support, but is at least reliable for basic application/file launching.

Regarding which software ecosystem, I sill favour macOS, where there are a lot of independent, high-quality, low-cost applications such as Alfred, Pixelmator, Sketch. However, over recent years, I feel cross-platform applications have become increasingly impressive, something I expect to continue with Progressive Web Apps (PWA), etc.

In conclusion, I still prefer macOS as an operating system (I am more comfortable using a UNIX-like environment). However, I have been very impressed with Windows 10 (specifically v1809), which has proven to be fast and reliable. Outside of a few notable exceptions (v1803), Microsoft has also done a good job of delivering continuous improvements (including new end-user features), which cannot be said about Apple and macOS (although this might begin to change with the public release of Marzipan).