I first used a Mac in 1996, a Power Macintosh 6000 Series, based on the Quadra 630 form factor. As this hardware pre-dated Mac OS X, I initially favoured my Windows PC, running Windows 95. This changed in 2003 when I purchased a Powerbook G4 running Mac OS X 10.3, which served as my primary computer at university.

Since the launch of the iPhone in 2007, Apple has shifted its focus away from the Mac, looking to maintain its market dominance in mobile computing. As a result, the Mac and macOS have felt a little neglected, with extended product lifecycles and inconsequential updates.

The most significant update in recent years was the release of 2016 MacBook Pro, which included the infamous butterfly mechanism keyboard and Touch Bar. Although this release was a departure from the previous design, the new features were not well received and have since been a point of frustration (Keyboard) and neglect (Touch Bar).

Although I have used a Mac as my daily driver for the past fifteen years, I have also had regular access to Windows PCs, including my custom-built PC and (most recently) a Surface Book 2. However, partly due to my new role, I recently made the switch to a Windows laptop as my daily driver.

I wanted a laptop that would be the equivalent of my 15-inch MacBook Pro, therefore I selected Lenovo ThinkPad X1 Extreme, with the following specification:

This article is not intended to be a detailed review of the ThinkPad X1 Extreme, for that, I would recommend Engadget or MobileTechReview. Instead, I thought I would share my initial thoughts, comparing the primary differences between the ThinkPad X1 Extreme and 15-inch MacBook Pro (specifically the hardware, not the software).

To keep things simple, the article is split into two parts: Positives and Negatives.

The port selection on the Lenovo ThinkPad is exceptional.

When compared with the MacBook Pro (4x ThunderBolt 3 ports), it is refreshing to be able to use traditional USB devices and connect to a TV/Projector via HDMI, without needing to locate a dongle.

Lenovo has also managed to deliver this wide range of ports, without negatively impacting the size or weight of the laptop. In my opinion, the ThinkPad feels no more cumbersome than the MacBook Pro.

The ThinkPad keyboard is a dream to use, it has excellent key travel (1.7 millimetres) and large, well-spaced keys. Although I have not been able to test over a prolonged period, I feel it is safe to state that ThinkPad keyboard will be more durable than the MacBook Pro, as it leverages a traditional (tried and tested) mechanism.

Although I personally do not mind the butterfly mechanism keyboard used on the MacBook Pro, I do believe the ThinkPad includes a better overall design, allowing for a more comfortable and accurate typing experience.

The 4K UHD Touch Display on the ThinkPad is also a highlight, delivering 186% of the sRGB colour gamut, which is an improvement over the 117% offered by the MacBook Pro. In short, the display is detailed and vivid, making text and photos look great. It also natively supports High Dynamic Range (HDR) for video playback, which is a nice feature, but let down by the poor software support in Windows.

Windows is also not great at scaling to high resolutions, resulting in some occasional visual anomalies such as text blurring. By default, Windows recommends 250% scaling, but personally, I prefer more real-estate, therefore I select 150%. This can make the text quite small but is closer to my experience using the MacBook Pro.

The display is also “touch” compatible, which technically works well, but in my opinion, is fairly useless on a traditional laptop. As the ThinkPad is not a convertible device (does not have a tablet mode), using touch requires you to lean over the keyboard, tapping against the wobbly display hinge. With that said, the display does open flat (unlike the MacBook Pro), which can be useful when working in a confined space.

Recognising the specification, the ThinkPad is unsurprisingly a great performer. The 6-core (12-thread) processor provides plenty of horsepower, supported by up to 64GB of RAM, a fast NVMe SSD and an NVIDIA GPU.

When compared with the MacBook Pro, Apple has a higher specification CPU (Intel i9), however, it is thermally constrained. As a result, the Intel i7 included in the ThinkPad is actually quicker for real-world tasks. The memory in the ThinkPad is also quicker (2666MHz vs. 24000MHz) and supports up to 64GB. Apple continues to be the market leader when it comes to storage speed (2700MB/s Read/Write), however, as highlighted below, the ThinkPad still delivers strong performance in excess of 2000MB/s Read/Write. 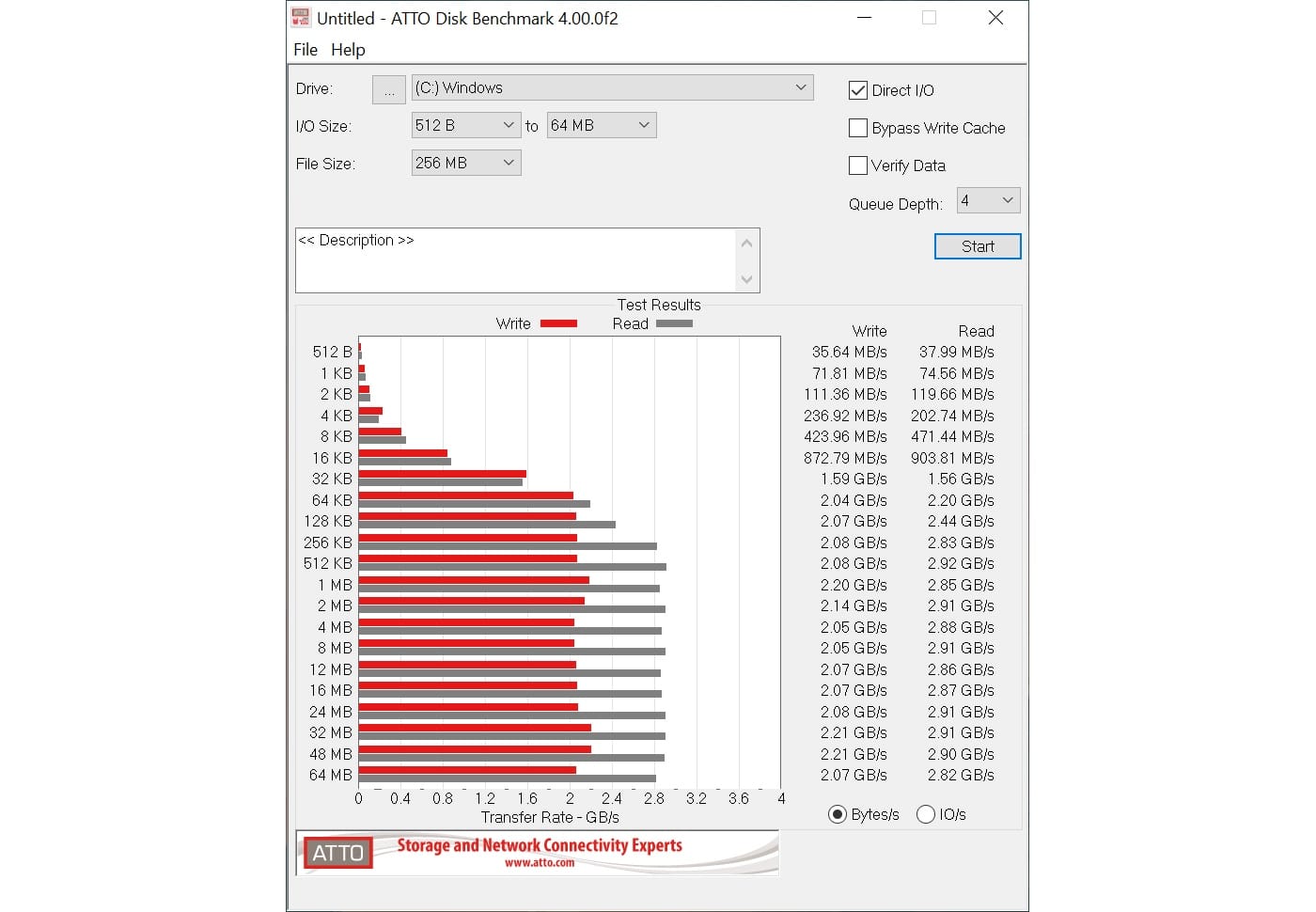 The ThinkPad includes the GeForce GTX 1050 Ti Max-Q, which is fairly old, but still a popular choice as it provides good performance, with respectable power consumption and thermals. Personally, I prefer NVIDIA graphics over AMD, which is what Apple has chosen to include in the MacBook Pro. In my opinion, NVIDIA continues to deliver more innovation and higher overall performance, including proprietary features such as CUDA (parallel computing platform and programming model), G-Sync, PhysX, etc.

The screenshot below highlights the PCMark 10 result, which easily outperformed my Surface Book 2 that scored 3946. As the ThinkPad is not a dedicated gaming laptop, I did not include a 3DMark result, although the NVIDIA GeForce GTX 1050 Ti Max-Q will play most modern games at 1920x1080 (medium settings). 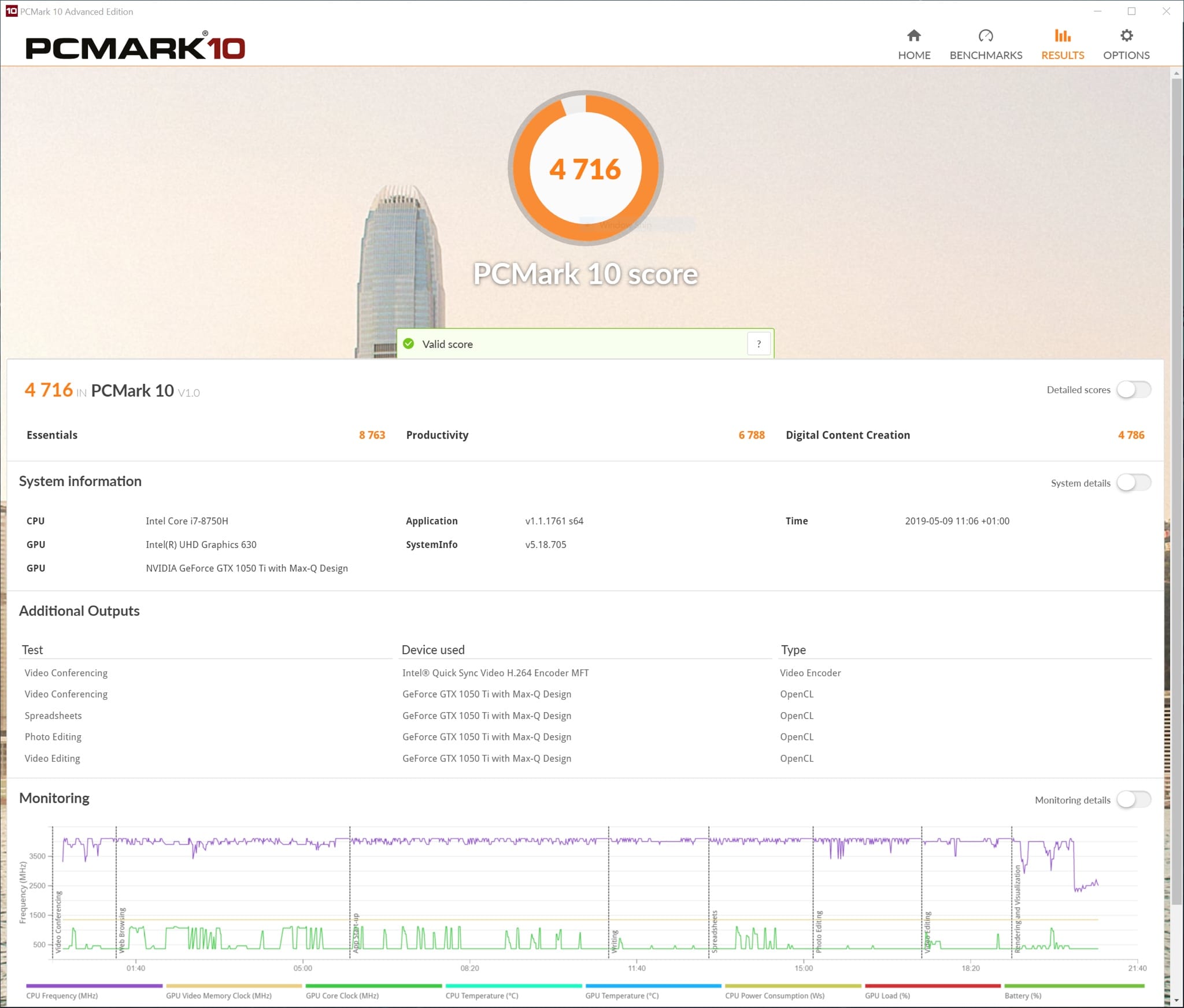 Although not yet confirmed, I suspect Lenovo will announce an updated ThinkPad X1 Extreme in June/July 2019. This will likely include the newer NVIDIA GeForce GTX 1650 Max-Q, offering up to a 20% performance boost.

On paper, the ThinkPad and MacBook Pro are fairly equal, however, as the ThinkPad offers better thermals, it will likely outperform the MacBook Pro when completing CPU/GPU intensive tasks. The added features (specifically CUDA) provided by the NVIDIA GPU are also beneficial when using applications such as Adobe Premier, etc.

The trackpad on the ThinkPad is my single biggest pain point. In fairness, this is really a failing of Windows laptops, but coming from a MacBook Pro, the Thinkpad trackpad is almost unusable (I now carry a mouse everywhere I go). It is well known that Apple makes the best trackpads, but it is only when you are forced to use a Windows laptop that the difference is fully understood. The MacBook Pro trackpad is incredible, it almost anticipates your movement and never feels sluggish or unresponsive.

On the ThinkPad, I frequently find the trackpad to be unresponsive or difficult to use with any level of accuracy. I have tweaked every possible setting in Windows (including the use of different drivers), hoping to “tune” a better experience, but I have yet to find an outcome that meets my expectations.

Recognising that the trackpad is the primary input mechanism on a laptop, the poor quality offered on the ThinkPad makes using the laptop infuriating.

You might be surprised to see build quality as a negative for the ThinkPad. To be clear, this is a well-built laptop, with a carbon fibre body and soft-touch finish (which is great when typing). Unfortunately, it simply does not compare to the build quality of the MacBook Pro, which (in my opinion) continues to be the best on the market.

As an example, I order a lot of MacBook Pro notebooks at work and can confirm that the level of precision and craftsmanship is always perfectly consistent. I also have access to a lot of ThinkPad laptops, where I have witnessed subtle inconsistencies between identical models.

In summary, the ThinkPad is well built, but I feel lacks the final quality assurance guaranteed by the Apple manufacturing process.

Lenovo state that the ThinkPad will achieve twelve hours of battery life. Unfortunately, I can only assume this result was achieved on the lowest specification (no 4K display), running a very light workload. In my experience, I have been getting closer to five hours of battery life, which can be restrictive.

For example, I travel from the UK to the US a lot and do not always have access to power whilst in the air. With my MacBook Pro, I will easily get nine hours of battery life, running a combination of Atom, Pixelmator, Docker and GameMaker Studio 2 at 50% display brightness. This is simply not possible with the ThinkPad.

On a positive note, the ThinkPad does include a 135W quicker charger (80% battery life in thirty minutes) and can be charged at a slower rate using USB-C. Therefore, assuming you have access to power, the battery life limitation is manageable.

This is completely superficial and also subjective, however, I would describe the ThinkPad style as understated, maybe even anonymous. In some respects, I like this “no thrills” design approach, as it clearly positions the laptop as a utility, focused on getting work done.

However, I suspect style conscious individuals will find the ThinkPad design to be a little uninspired, lacking any real unique design identity (outside of the iconic TrackPoint button). This is especially true when compared against the MacBook Pro and even PC competitors such as the Dell XPS line.

In summary, the ThinkPad X1 Extreme is a great laptop! It is fast, functional and (in the majority of cases) a pleasure to use.

Likely helped by the fact that I still use Windows on a regular basis, but I was pleased with how quickly I was able to adapt to using the ThinkPad as my daily driver. There are even areas I prefer over my MacBook Pro, specifically the keyboard and access to an NVIDIA GPU.

Unfortunately, as crazy as it sounds, the trackpad is a potential deal-breaker for me. Although I use a lot of keyboard shortcuts, I still rely heavily on the trackpad, therefore, to have such an important part of the laptop be this unreliable is unacceptable. I appreciate the ThinkPad includes the TrackPoint and touch display, however, in my opinion, these are simply not a viable replacement for a good trackpad. Therefore, if I end up switching back to a MacBook Pro as my daily driver, I suspect it will be the trackpad that pushes me over the edge.

Finally, it is worth highlighting the price of ThinkPad when compared to an equivalent MacBook Pro.

It is difficult to ignore that price difference. A saving of £1230.81 is a lot to pay for a better trackpad!