In January 2015, I wrote an article expressing concern regarding the future of Heroku for the enterprise. This was triggered by the market growth of Platform as a Service and the mind share being gained by competitors such as Cloud Foundry.

I felt that Heroku were not being transparent regarding their roadmap (especially for enterprise customers) and the true value proposition was getting lost in the Salesforce.com marketing.

As a result, I had recommended a number of changes, as well as a renewed focus on the enterprise (to better compete against the growth of Cloud Foundry, Docker, Serverless Computing, etc.)

Thankfully, over the past year, Heroku (and Salesforce.com) have made some real progress.

As a starting point, I think they have finally nailed the marketing by positioning the “App Cloud” brand, which is the name used to collectively describe Force.com and Heroku. I like the fact that App Cloud is not biased towards either platform, clearly articulates the purpose (e.g. Apps) and alludes to the fact that Force.com and Heroku can be used together to build composite applications. This is infinitely better than than the previous confusing “Salesforce1 / Heroku1” branding.

Alongside the marketing, Salesforce.com have also updating their pricing to include Force.com and Heroku platform access. Although this in progress, in my opinion, pricing remains highly confusing and one of the major barriers to entry for the entire Salesforce.com eco-system.

This brings me to the roadmap, which has also taken a major step forward. My previous concerns regarding the roadmap were not caused by a lack of innovation or great technology, but the ability to articulate the key messages. In January 2015 it was still quite common for Salesforce.com customers I spoke with to say “why do I need this Heroku thing?”

This actually works very well, as it clearly describes the focus areas and allows for new features to be easily positioned, prioritised and communicated. It is also great to see “enterprise” as a core part of the strategy, allowing Heroku to move beyond their “start-up” heritage.

Heroku has always led the way regarding developer experience and pioneered the “develop, push, scale” mentality that is now a minimum expectation for all developers.

Heroku have recently enhanced this experience through the enablement of Pipelines.

A pipeline is a group of Heroku apps that share the same codebase. Apps in a pipeline are grouped into “REVIEW”, “DEVELOPMENT”, “STAGING”, and “PRODUCTION”, which represent different deployment steps in a continuous delivery workflow. A pipeline also allows for multiple applications to live at each stage and provides a simple, visual representation of the end-to-end lifecycle.

Prior to Pipelines, developers were forced to manage this workflow manually using namespacing, which quickly became complicated (especially when building microservices).

Thanks to the tight integration with GitHub, Pipelines can be setup via a few simple clicks. Once enabled, any open GitHub Pull Request will automatically create a review app (under the REVIEW stage), allowing developers to see their changes in real-time. Once the Pull Request has been merged, the review app is automatically closed.

This type of seamless continuous delivery workflow is exactly what makes Heroku a pleasure to work with and acts as a true differentiator when compared with other platforms.

One of the perceived barriers with Heroku for the enterprise is the lack of “Private Cloud” option. I personally believe this barrier is nonsense, but perception is powerful and it could become a real sticking point.

Heroku could have chosen to follow Pivotal, but abstracting the Platform as a Service from the underlying infrastructure (e.g. via BOSH). However, this approach would go against the core principles of Salesforce.com (e.g. Pure Cloud) and likely not provide any unique selling points.

As a result, Heroku have chosen to create Private Spaces.

A Private Space (in my opinion) is how “Private Cloud” should be done, as it does not compromise on the key value proposition of Platform as a Service, by ensuring that businesses can still exclusively focus on their applications and data, not the lower levels of the technology stack.

In short, a Private Space is a network isolated group of applications and data services with a dedicated runtime environment, provisioned to Heroku in a chosen geographic region. This setup provides strong security and privacy controls, as well as allows Heroku applications to securely connect to on-premise systems and other cloud services, including Force.com.

The key value proposition of a Private Space is that it can be created with a single click (see image below). The process itself takes approximately eight minutes, at which point you have your own “Private Cloud” instance of Heroku. You can create as many Private Spaces as you require and once created the developer experience is completely unchanged. 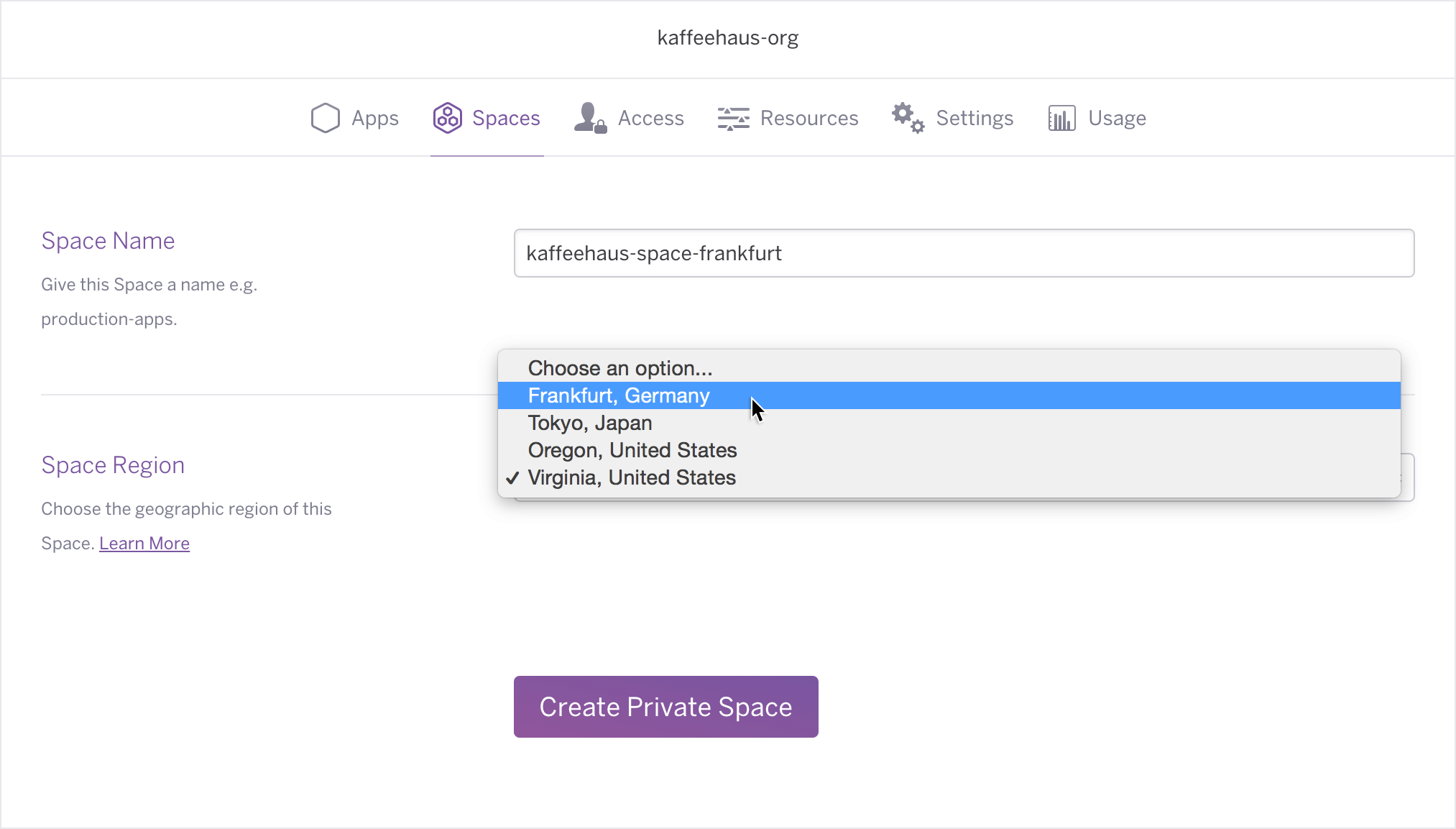 With my infrastructure background, I am very impressed by Private Spaces! Watching a Private Space get provisioned is wonderfully underwhelming, as it just works!

In summary, Private Spaces will help enable enterprise customers migrate to the cloud, act as a clear market differentiator and also paves the way for other enterprise requirements such as privacy and compliance certifications.

At the heart of Salesforce.com is the customer. This is evident in their marketing and broader eco-system (Sales Cloud, Service Cloud, Marketing Cloud, etc.)

Heroku is now (finally) being positioned as a core part of the customer journey, with many patterns and examples available.

With this in mind, I believe Heroku will play an increasingly important role in the Salesforce.com eco-system. This is not only for customers who are looking to build composite applications (Force.com + Heroku), but also for Salesforce.com themselves, as Heroku provides the perfect foundation to build other services. I predict we will see new Salesforce.com services that will no doubt be branded “something Cloud”, but will secretly be built on Heroku (probably in a Private Space).

In summary, my previous concerns related to Heroku Enterprise have been answered. I believe with this new structure and focus, Heroku have re-positioned themselves as not only a viable enterprise platform, but arguably the most viable for businesses looking to “get out of the infrastructure game” and focus on customer value.