Last year I built a new PC based on Intel’s Ivy Bridge architecture. One of the more unusual design decisions was the use of two Solid State Drives running in RAID 0. The main reason for this decision was the fact that I already had two Intel X25-M (G2) drives available, but I also wanted to boost their performance, as individually the X25-M is easily outpaced by modern Solid State Drives. The results of the RAID 0 configuration were impressive, essentially doubling my read / write performance.

At the time Intel did not support TRIM in RAID, which in theory would impact performance over time. However, after three months of steady use, I confirmed that any performance degradation was minimal.

I continued to use my RAID 0 setup for many more months without any issues, however with the release of the SanDisk Extreme SSD (offering an incredible price / performance ratio) I decided to upgrade, replacing my two X25-M drives, with one 240GB SanDisk. The performance between my RAID 0 setup and the SanDisk was approximately equal, with the added benefits of a simplified configuration (no RAID), improved resilience and better power consumption.

That brings me to today, where I have been lucky enough to receive a second 240GB SanDisk Extreme SSD. The question is, do I configure it as a separate drive or return to a more complicated RAID 0 setup? The answer was made simpler with the release of new Intel Rapid Storage Technology (RST) drivers, which for the first time enable TRIM for RAID 0 setups. As a result the draw of extra performance (even if it’s not needed) was too great!

I configured the setup using the default MSI Z77A-GD65 RAID manager using a 128kB stripe size. Once configured I installed Windows 8 Pro x64 and ran CrystalDiskMark to get a feel for the performance improvements. The before and after results can be seen below. 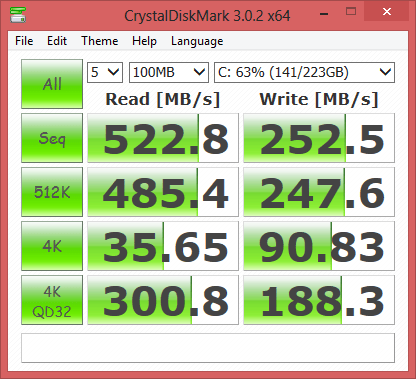 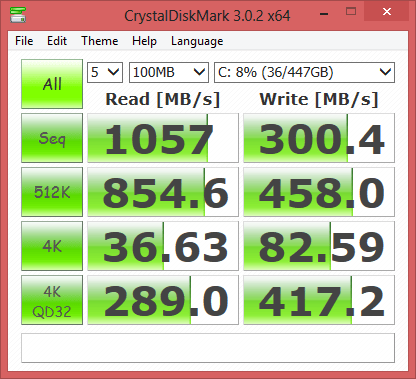 As you can see from the results, the most impressive increase was the “sequential read” which went from 522.8MB/s to 1057MB/s. The other results such as “512K” and “4K QD32 write” were also very impressive!

These numbers are great, but will they make any difference in the real world? The answer, it depends on what you are doing, but probably not. Having been using this setup for a couple of days I can confirm that general usage of my PC has not dramatically changed (considering it’s already extremely fast). Therefore, if you already own one fast SSD and are on a budget, then I would not recommend you spend your money on a second.

With that said, if you have the option for a second SSD, don’t be afraid to configure them as RAID 0. You will see better performance (even if it’s marginal in the real world), but will also double your single drive storage (in my case from 240GB to 480GB) as seen by Windows. This is valuable, considering SSD capacity options are still relatively small, while applications and games continue to increase in size (e.g. Max Payne 3 required a 35GB install). This is also backed-up by the fact that Intel now officially support TRIM with RAID, removing one of the only barriers for this type of setup with Solid State Drives.

I’ll be sure to post an update in a couple of months, providing additional insight into my RAID 0 setup.